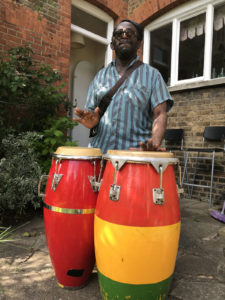 The UK’s pioneering avant/reggae label On-U Sound is announcing the re-issue of four studio albums by African Head Charge on vinyl, originally released 1990 – 2011 alongside an album of unreleased music from the 1980’s and a 5 CD box set including material from these same releases on March 6.

Part one of the epic reissue campaign On-U Sound started in 2016 with the reissues of the crucial early years of African Head Charge, the long-running collaboration between master percussionist Bonjo Iyabinghi Noah and maverick UK dub producer Adrian Sherwood.

This new series picks up the story in 1990 with the album that is widely regarded as their masterpiece, Songs Of Praise. It’s been expanded to a double album with a whole raft of bonus tracks, as has 1993’s In Pursuit Of Shashamane Land.

2005’s Vision Of A Psychedelic Africa and 2011’s Voodoo Of The Godsent are pressed to vinyl for the first time, both as double LP sets, and as a companion piece to the Return Of The Crocodile LP of early rarities, Churchical Chant Of The Iyabinghi compiles alternate mixes and dubs from 1990 -1993. Each vinyl LP comes with a double-sided 24″ x 12″ poster containing an exclusive new interview with Bonjo in 5 parts alongside rare photos.

All of the contents from the vinyl reissues are also anthologized in the 5CD and 36 page book box set, Drumming Is A Language, the companion set to the acclaimed Environmental Holes & Drastic Tracks.

African Head Charge started life as a studio recording project in 1981 when the percussion talents of Bonjo Iyabinghi Noah combined with the studio wizardry of Adrian Sherwood. Bonjo had come to England from a Rasta camp in the hills of Clarendon, Jamaica. From as early as he can remember he studied and played percussion, learning not only Rasta/Nyabinghi drums but also African and Afro Cuban rhythms. He also loved to experiment, which made working with Sherwood perfect. Working with tape loops, manipulated and vari-speeded 1/4 inch tape that was re-recorded back to the multi-track tape, reverbs and delays, this was then applied to the performances of the musicians. And so the first psychedelic African dub LP My Life In A Hole In The Ground was created.

It was not until the late 1980s that African Head Charge made its first appearance as a live band, taking place at the University of London (ULU) and instantly a sold-out success. What followed in the next few years gave them semi-legendary status, with performances at festivals such as Glastonbury and Womad, and visits to Australia, New Zealand and Japan.

Three more largely experimental studio albums followed throughout the 80’s: Environmental Studies (1982), Drastic Season (1983) and Off The Beaten Track (1986). The latter has been hailed as both a seminal recording in the progressive use of sound-bite technology and an excellent example of the integration of live instrumentation and programmed music.

1990 saw the release of the Songs Of Praise LP  widely acknowledged as their masterpiece. It featured religious chants from different parts of the world set to an African dub backdrop of multi-layered percussion and demonstrated another evolution in their sound. It was followed by the complimentary In Pursuit Of Shashamane Land album in 1993.

In 1995 Bonjo left London to start a new life in Ghana and it was not until 2003 that he made a return visit to London and renewed his partnership with Adrian Sherwood on Vision Of A Psychedelic Africa, released in 2005. Voodoo of the Godsent is their most recent studio album, described by the label as being ‘the culmination of thirty years of endeavour.’

In 2016 On-U Sound put out vinyl reissues of the first four African Head Charge albums, which had become increasingly sought after by DJs and collectors. These were followed this up with an LP of unreleased tracks and version excursions from from that same early-80s period, Return Of The Crocodile, carefully transferred from the original decaying tapes and sequenced for release by On-U archivist Patrick Dokter.

African Head Charge have returned to the live stage in recent years with a line-up featuring original African Head Charge members and augmented by the electronics of Gaudi (recently heard on Lee “Scratch” Perry’s Rainford and Heavy Rain). The current show fuses together djembes, guitars, drums, keys and vocals with heavy electronic sampling and visuals. The collective use this blend of live and electronica to generate an intoxicating soundscape of reggae-inflected drumming, visceral vocals and bottomless, thrumming bass-lines that truly reach to the heart of your being.

On-U Sound is an iconic independent label with a treasure trove of remarkable music, and sits in a unique position historically as a junction point between the heavy influence of Jamaican music on UK culture and the development of disparate sounds such as post-punk, hip-hop, industrial, jungle, dubstep and beyond.

The label emerged from a fertile UK DIY scene that birthed contemporary imprints such as Rough Trade, 4AD and Factory. Since 1981, with label boss and producer Adrian Sherwood at the helm, On-U Sound has released over 100 albums and singles and launched the careers of countless artists.

In 2015, Adrian continues to be in-demand for his unique sonic vision as a producer and he tours globally with his unique live mixing/DJ hybrid sets. There is also a major project underway to reissue and reappraise the amazing back catalogue of classic records that have been released on the imprint, with represses of classics sides, retrospective compilations such as the Sherwood At The Controls volumes and Science Fiction Dancehall Classics, rare cuts from the vaults, all complimented by critically acclaimed new productions with Pinch, Nissennenmondai, Roots Manuva and Lee “Scratch” Perry. The label recently scored their first Billboard number 1 with Heavy Rain, a dub album co-produced by Perry and Sherwood and featuring guest musicians including Brian Eno, which hit the top of the US reggae charts on release.