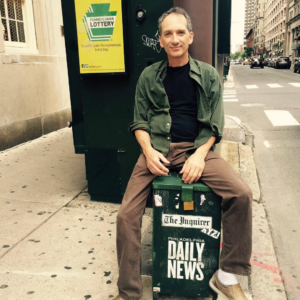 On Saturday, April 23, Ben Vaughn’s celebrated career will come full circle with the release of The World of Ben Vaughn. A return to his roots—his recording roots, that is.

In 1986, the singer/songwriter/multi-instrumentalist debuted his first album on vinyl only. He had no choice. The CD player was not yet an everyday home appliance. But now the past is in our future. Turntables are back and he’s been invited to deliver a limited edition, 12-inch LP in time for Record Store Day, 2022 (CD, digital download and streaming release to follow on May 20). To mark the occasion, Vaughn has come up with a collection of all-new songs and recorded them with a vision of a 12-inch LP spinning in his head.

“I could picture the packaging, the label art, the colored vinyl, the whole bit,” he says. “I even heard the Side One and Side Two break as I was creating. Amazing how inspiring a manufacturing format can be!”

Writing and recording to a deadline is nothing new for Vaughn. After releasing seven albums (including the legendary Rambler ’65, recorded entirely in his car) and touring internationally, he spent more than a decade in Hollywood creating television music for Third Rock From The Sun, That ’70s Show, and scoring numerous films. “It was extremely high- pressure but I enjoyed it. Nothing focuses the mind like knowing you’ll be hanged in the morning.”

To realize his new vinyl vision, Vaughn recorded in two California locations: the Relay Shack in the Mojave Desert, well-known to fans of his syndicated radio show, The Many Moods of Ben Vaughn, and the Penthouse in Santa Monica.

He also decided to play everything himself, jumping from one instrument to another as he laid down the tracks. “When I was a teenager, I was blown away by the first Emitt Rhodes and Paul McCartney albums and my earliest recordings were one-man-band experiments. I started out as a drummer, so it felt natural to build a track from the ground up. It wasn’t easy in the days of reel-to-reel tape. I eventually went on to record in a more conventional manner with backing musicians but returned to this method from time to time, depending on the material. This songbook felt right for that approach.”

The lead-off single, “In My Own Reality,” is a country-rocker about creating a world inside one’s head where trouble visits but never takes up full-time residence. The arrangement features floating, spaced-out guitar and a California hippie bass solo.

In “Wayne Fontana Was Wrong,” Ben Vaughn proudly pays tribute to one of his musical heroes and the British Invasion hit, “The Game of Love.” However,” he notes, “Wayne had it all wrong. Love is definitely not a game.” This important social message is musically underscored by handclaps and Sixties garage-rock organ.

“Blind Alley” is a black-and-white film noir in song. Dark streets. A mysterious rendezvous. Danger lurking around every corner. Betrayal. And of course, love. The backing track consisting of bass, finger snaps, and snare drum provides a suitably sparse setting for this cautionary tale.

The banjo on “Deep In The Weeds” helps to keep the overall sound of the record varied, as does the 12-string guitar on “Nobody Likes A Show-Off” (a song Vaughn swears he did not compose on a napkin at his usual table at the Polo Lounge in the Beverly Hills Hotel). Blues harmonica is also prominently featured. “Probably the result of cutting my teeth playing biker bars in the woods of South Jersey back in the day,” Vaughn reminisces. “Those guys would yell, ‘Play the blues or die!’ I chose the blues.”

Ben’s experience as a record producer (Arthur Alexander, Ween, Los Straitjackets, Nancy Sinatra, Charlie Feathers), his renown as a songwriter (Marshall Crenshaw recorded “I’m Sorry (But So Is Brenda Lee)” and his collaborations with such artists as Alex Chilton, Alan Vega, and Rodney Crowell have cemented his reputation as a career artist. But that doesn’t mean he’s tied to the past.

His work remains relevant. Just recently, indie rock icons Deer Tick released a version of Ben’s signature song, “Too Sensitive For This World.” And his radio show continues to pick up a multi-generational listenership. “It turns out that hanging onto my old vinyl and 8-track tapes was a smart professional move. Who knew?”

This looks to be a busy year for Ben Vaughn. Tied in with the Record Store Day release of The World Of Ben Vaughn will be a string of U.S. dates and a tour of Spain in May. “I’m excited about performing the new songs in front of people,” says Ben, “and it looks like that might actually be allowed to happen now!”