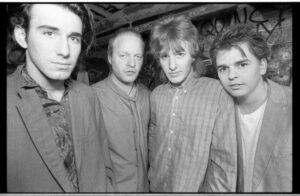 The Bar None label, in conjunction with Fiasco Records, is excited to announce the upcoming release of Riches to Rags, a long-lost album by Minneapolis’ Bleeding Hearts featuring Bob Stinson, a founding member of The Replacements, on lead guitar. Riches to Rags will be a Record Store Day 2022 exclusive, pressed on 12” blood-red vinyl with liner notes by journalist Bob Mehr who won a Grammy Award for his album notes to the Dead Man’s Pop box set, an expanded re-issue he co-produced of the Replacements Don’t Tell a Soul album; Mehr wrote Trouble Boys the definitive Replacements biography Trouble Boys; he describes Riches to Rags as “the final piece to the puzzle of Bob Stinson’s musical career.” The album release will be preceded by the digital single, “Happy Yet,” on March 17.

Bleeding Hearts was the brainchild of Stones-fixated singer / songwriter / guitarist Mike Leonard who started the group with drummer Bob Herbers and bassist Rob Robello. In search of a second guitarist and having no luck, Leonard approached Stinson at the Uptown Bar where both were regulars. They became roommates and, as Mehr’s notes relate, “the two played together daily, roughhoused like little kids, rehearsed with the band five times a week, and listened to music the rest of the time.”

Riches To Rags was the result of pure serendipity. Fiasco Records’ Sunshine Dunham found a complimentary copy of Spin Magazine in a CMJ Music Marathon festival gift bag featuring a piece on Stinson’s post-Replacements exploits, that mentioned his move from Static Taxi to Bleeding Hearts.

She tracked the group down, offered to record them and they made Riches to Rags in Minneapolis in 1993, a tight well-crafted set of high energy rock tunes that owed a debt to the Replacements and showed once again what a stellar guitar player Bob Stinson was.

The album’s filled with upbeat, catchy Minneapolis rock, with hooks galore and Bob’s ever present bright chords shining through.

Unfortunately, the overabundance of creative energy and artistic visions led to heated clashes and then Bob was out of the band right as recording completed. Bleeding Hearts carried on for a while without Bob, but their momentum was gone. Mike disbanded the outfit and joined the popular Minneapolis outfit the Magnolias. Stinson would pass away two years later, and the Bleeding Hearts recordings were left unreleased.

Finally, 30 years later, Bleeding Hearts will get their due, thanks to Fiasco Records preserving the session tapes for some three decades and Bar None taking the final steps to deliver this very special Record Store Day exclusive, April 23, 2022.