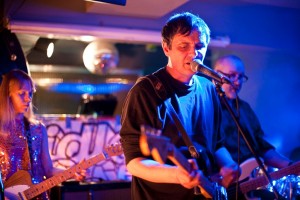 Martin Bramah is poised to begin a new chapter in the history of the band he founded, Blue Orchids, while also embracing his past. He’s releasing a new album from the band, a series of reissues, introducing a new live line-up and a previously unreleased solo album on LP, CD and download June 3 via the Tiny Global Productions imprint.

The legendary band’s new ten-track album The Once And Future Thing shows Bramah’s songwriting to be as strong and diverse as ever, from the powerful opener “Good Day to Live” to the delicate and sensitive “Rosy Hours” and the twisted English city blues of “Motorway.” Backing Bramah live will be a new band comprising Ann Matthews (Ectogram, Fflaps) guitar; on drums, Chris Connolly (The Glitter Band, Ed Banger & the Nosebleeds, V2); and Vince Hunt (Inca Babies, A Witness) on bass.  They’ll be performing a set filled with classics from the group’s four main albums – The Greatest Hit, The Sleeper, Mystic Bud and Slum Cavern Jest – as well as material from the new album. These dates marks a long-overdue return to the stage for Bramah and his mesmerising, shamanic performances. There’ll also be samplings from Bramah’s various musical incarnations as “Factory Star” and as a solo artist.

The songs on The Once And Future Thing confirm Bramah’s status as one of the UK’s most inventive and original guitarists and a superbly measured, thoughtful lyricist. Perhaps that’s why Blue Orchids were chosen by Nico (of Velvet Underground fame) to back her for several years; why his songs have been covered by Aztec Camera, Sonic Youth, Dustdevils, Monks Of Doom, Crystal Stilts, Slovenly, Fish & Roses and many more; why he’s been acclaimed by successive generations of musicians and writers for “making music which is introspective yet exhilarating, sad but stirring.” (Dave Hill, City Limits.)

A founding member of The Fall, and its primary songwriter for the early releases, Bramah formed the Blue Orchids with two other disillusioned early Fall members after the release of the Live at the Witch Trials album – with almost instant success.  John Peel championed the 7” singles “Work” and “The Flood” and had them record two radio sessions. Soon after, a high-profile tour with Echo & the Bunnymen followed.  Their debut album, The Greatest Hit (Money Mountain) topped the indie charts and delivered five classics still in the set today – “Sun Connection,” “Dumb Magician,” “A Year With No Head,” “Low Profile” and “Bad Education.”

Over the years, the personnel of the Blue Orchids came to read like a Who’s Who of the independent music scene, including members of James, Dislocation Dance, the Smiths, Primal Scream, Buzzcocks and many more.

Ten years after his departure from The Fall, Bramah rejoined for the band’s Extricate album – to date, still the band’s biggest-selling album… and then departed again, with Mark E. Smith telling him, “You’re just too good for the band!” (likely the only time a musician left the band with actual praise from the irascible Smith!)

As well the new The Once And Future Thing album there’ll be several archival releases: an album collecting their non-lp Rough Trade material (and rarities) called Awefull, the first-ever release of Martin Bramah’s legendary long-unissued solo album The Battle Of Twisted Heel and a limited edition double CD of live shows from 1981 and 1985.  All will come with download cards featuring added material and bonuses.

Having created one of early post-punk’s most distinctive sounds with their strung-out keyboards weaving around inventive, discordant guitar patterns — once described as “Phil Spector meets the Velvet Underground beneath the Blackpool illuminations” – the Blue Orchids now move on, determined to make the world a more colourful place. The Once And Future Thing will confirm Martin Bramah as an artist who has followed his muse and continues to write great and memorable songs.