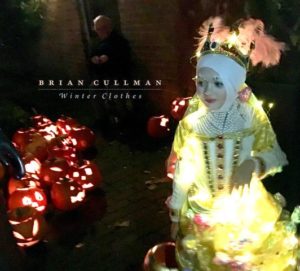 BEAUTIFUL!  The world gets larger, and more joyful, and I’m listening and smiling, laughing at so much surprise and delight.

Winter Clothes is the new summer record from Brian Cullman. It is exuberantly sad.

Wonderfully heartrending. If you turn the world upside down, it is summer somewhere, but you’re stuck wearing winter clothes,

Brian Cullman. This could be his best record ever, and the production scintillates.The lyrics do something else. This, unexpected, left me undone.

At once raucous and tender, Winter Clothes is Brian Cullman’s most fully realized album to date, one with nothing to prove, just the easy camaraderie of first-rate musicians playing together, the snap crackle pop of the rhythm, and the smoky beauty of the songs. It’s being released on September 11 by noted New Music label, Sunnyside Records.

This is Cullman’s first fully cooperative album with longtime friend and collaborator Jimi Zhivago (Glen Hansard, Ollabelle). Many of the songs were assembled during writing sessions where the two of them played ideas off one another, working through melodies and rhythms until the pieces were fully in sync. Tragically, Zhivago went into the hospital during recording of the project’s final song. Brian visited him daily with the day’s output and shared ideas and plans up until the day he passed away. The recordings were shelved for over a year before Cullman felt he could return to them.

Since recording his last album, The Opposite of Time, Cullman has been back and forth to Lisbon, recording and performing as part of Rua Das Pretas, a loose and ever-shifting group of Brazilian, Portuguese and international musicians dragging fado & bossa into the future, as well as into the nearest tavern.  Cullman also composed music for the upcoming film The Bay of Silence, starring Brian Cox & Claes Bang, and continues to write regularly for The Paris Review. And all of these elements, the travel and the homecoming, the poetry of the streets and the thunder in the distance found their way into the songs and the sound.

“I’ve been lucky in having wonderful collaborators,” says Cullman. “Years ago, I recorded with Mark Knopfler alongside Rod Argent, Colin Blunstone and Chris White of The Zombies in London; I worked with Robert Quine at Noise New York; with Vernon Reid and the lovely Sara Lee in my old band OK Savant. But this was probably my deepest recording experience. You usually just gather in a dark & lonely studio, mumble a few words, light a few candles and hope that the spirits will show up. This time they did.”

“Wrong Birthday” is loose and sloppy in the best possible way, sounding like an early Stones out-take.

No more candles on your cake

Your shiny car has got no brakes

You’re at the wrong birthday

“Killing The Dead” explores the idea posited by Game of Thrones that the dead don’t stay dead. Zhivago plays a ringing Buddy Holly groove the way Pete Townshend might and MaryAsque swoops in at the coda with sugar hiccups that would make The Cocteau Twins proud.

When time’s at an end

The hands on the clock start to bend

“Someday Miss You” is a midnight blues about changing your ways, changing your life, an intimate conversation between Brian and Jimi’s guitars, with Byron’s acoustic bass anchoring the sound, standing in the doorway, checking ID’s.

Lead me out of present danger

Cause if I fall one more time

“Down Down Down” has a swampy groove straight out of early Little Feat or The Meters’ work with Lee Dorsey.

Are torn & caked with blood

And if I could

Get out of them for good.

The breadth of sounds and honesty of voice on Winter Clothes makes for an unexpectedly deep and powerful listen.

If you turn the world upside down, it’s sure to be winter somewhere.