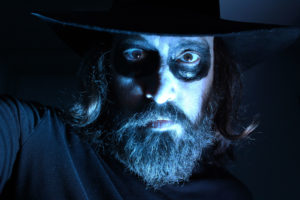 Teaming with otherworldly slide guitars, country psych, barn burning anthems, the fourth full length release from Louisiana native Brother Dege, Farmer’s Almanac, is a sprawling, southern concept album that further explores the unique mysteries of small towns. Farmer’s Almanac is being released June 1 by Psyouthern Records, coinciding with European and American tours running through to the end 2018 with band full-band and solo Delta-style shows that kicked off with a headlining showcase at SXSW 2018 at Austin’s legendary Antone’s.

Grammy-nominated (Quentin Tarantino’s Django Unchained) Brother Dege Legg is one of the best-kept secrets in Louisiana; a musician, writer (Louisiana Press Award 2004, 2008), outsider artist, and heir to a long line of enigmatic characters birthed in slaughterhouse of the Deep South.

It’s a been a wild ride for this boy. Like the mad love child of Son House and William Faulkner, Legg has burned a colorful trail through the Promised Land, working odd jobs (dishwasher, day laborer, cabdriver, embedded journalist, homeless shelter employee), hitchhiking, studying philosophy, writing, and experimenting with psychedelics – all while passionately clashing with the pecking orders, prejudices, and parochial narrow-mindedness of that thrives in small towns.

Growing up, there were few promising opportunities for young man of Legg’s stripe in Cajun country and things eventually got difficult and strange: chronic bouts of depression, habitual drug use, small town drama, and arrests soon became routine. During one gloomy episode – deflated, broke, and strung out – Legg climbed the Mississippi River Bridge in Baton Rouge, determined to dive into the next life, but after a last-minute change of heart, humbly climbed back down and vowed to find a better way to exist. He immediately drove himself to rehab in a stolen Camaro and rededicated himself to his most cherished creative pursuit, namely songwriting. He formed the southern tribal rock band, Santeria who had a 10-year run of chaos and bedeviled kookiness (1994-2004). After four albums, they disbanded in an anarchic heap of bad luck, poverty, exhaustion, and Hoodoo curses they suspected were cast on the band to hasten their demise.

Legg spent the next year living in low-rent motels and trailer parks, writing new songs that tapped into the haunting style of the Delta Blues greats. With an odd ease, the songs poured out, spitting new life into the genre, not by hackneyed imitation, but by infusing original Delta-slide songs with his own experience of growing up in the Deep South—young, white, alienated, and lost. Legg’s Robert Johnson-on-Thorazine-style slide work paired with his droning-rural psychedelia brought the backwoods sounds of Louisiana (hurricanes, cows, cicadas) to life while remaining firmly rooted in the troubled and death-obsessed masters. This batch of songs became the first Brother Dege release, the now critically-acclaimed Folk Songs of the American Longhair</em (2010) – a record that Quentin Tarantino later referred to as “almost like a greatest hits album” of new Delta blues.

Home-recorded in Lomax-like austerity, the album delivered postmodern tales of desperate southerners, apocalyptic prophecies, midnight angels, hippie drifters, burning barns, and the endless ghosts that haunt the history the Deep South. Quietly self-released with no distribution, no representation, and absolutely no hype, Folk Songs of the American Longhair quickly earned 4-star reviews (UNCUT) and gained the attention of numerous tastemakers in film and TV, scoring sync placements on Discovery Channel’s After the Catch, Nat Geo’s Hard Riders, women’s cycling documentary Half the Road, Netflix’s The Afflicted, and most notably hand-picked by Quentin Tarantino for inclusion in the movie and soundtrack to Django Unchained.

Brother Dege quickly expanded his cinematic vision of the South with two follow-up albums: How to Kill a Horse (2013) and Scorched Earth Policy (2015).

At this point Brother Dege racks up Spotify: 139,643+ listeners/month at Spotify, 10m+ views to date on his YouTube channel and gets 500,000+ spins/month at Pandora.