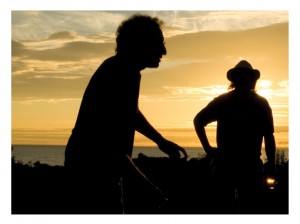 “David and I first met in 1980,” Travis recounts. “He worked in a nursing home and had started The Duplex Planet, a publication built around his conversations with the residents. Besides the hundreds of issues that appeared from 1979 to 2010, it also spawned books, CDs, a comic book adaptation, and many performances of monologues with music. He was at the beginning of that long and wonderful journey and I had just started up with The Incredible Casuals, which also turned into something that spanned a few decades. At the same time David was playing bass with Men & Volts who released five albums over the course of the eighties. (A four LP box set titled Honeymoon Luggage was issued earlier this year.)

“He lived in Boston and I lived on Cape Cod. When we visited each other’s homes we were both pleased to discover that they were similarly stuffed with knickknacks, ephemera and music. He had co-written Men & Volts’ “Records Go ‘Round” that the Casuals covered and it became a staple of our sets. I asked him if he’d like to write with me and our first song was “(You and Me) Pushin’ Up Daisies.” That was also the first of a handful of “old man” songs we’ve written, including “This is Home,” “January,” “The Strongman of North America,” and “Take Me With You,” which are also on Bocce & Bourbon. At this point we’ve written some fifty songs. When we started, he’d send lyrics that I’d put to music, but in the last few years we’ve done more that start with the music, with him adding the words to my melody.

“I just did an interview and was asked what I love about David’s lyrics, and I said that it’s the same thing I love about The Kinks’ Village Green Preservation Society and a lot of their material from that period. It’s pastoral and unusually concerned with the minutiae of life – the little things. It’s unpretentious and never overblown, just matter-of-fact empathetic; there’s no grand statements. And I’ve always admired his facility with images. He takes his time, he’s very sweet, a little odd and definitely funny, and I just love him.”

“By the Way” and “Air, Running Backwards” join the rich tradition of love songs from around the globe.

“I’ll Wait” paints a gently sympathetic portrait of an indigent fellow holding on to his dignity. “The Strongman of North America” is from the vantage point and aging man looking back on the finer things in life