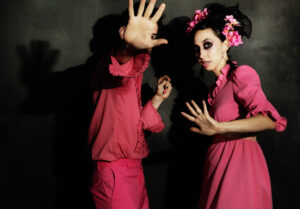 Brooklyn-based musical duo Charming Disaster’s upcoming album, Our Lady of Radium, represents a departure from the occult themes the goth-folk duo have become known for on their past releases. On the new album, Charming Disaster’s Ellia Bisker and Jeff Morris apply their playfully dark artistic sensibility to the life and discoveries of pioneering scientist Marie Curie, as well as the tragic story of the “Radium Girls” and other consequences of Curie’s work. Our Lady of Radium will be released March 4 on CD, 12-inch vinyl LP and via download, simultaneously with a limited-edition lyrics and art book that includes Charming Disaster’s research notes and original illustrations by artist Susan Saas.

Madame Curie, who was awarded two Nobel Prizes for her groundbreaking work in physics and chemistry, is an ongoing source of popular fascination, as evidenced by recent streaming series and films like Radioactive, but Charming Disaster’s concept album is the first of its kind. Our Lady of Radium includes nine songs exploring moments from Curie’s life and research: the ancient folklore of the mountains where radioactive ores were mined; the romance of equals between Marie and Pierre; the famous spirit medium whose séances they attended; Marie’s grief following Pierre’s tragic death; the physical characteristics of radium itself; and the personal scandal that almost destroyed her. The album also depicts the tragedy of the “Radium Girls,” who were poisoned in the course of their employment, painting watch dials with radium-based paint. In addition, Our Lady of Radium deals with duels, alchemy, dwarves, romance, Egyptian mythology, radioactive decay chains, and other secret histories.

This project began in 2017, when Bisker and Morris were awarded an artist residency by Crosshatch Center for Art & Ecology in Bellaire, MI. The duo undertook extensive reading and research into Curie and her work, and wrote a cycle of nine interwoven songs telling fragments Curie’s story. The songs then lay dormant while the band toured extensively and recorded another album (2019’s SPELLS + RITUALS).

In early 2020, Charming Disaster were preparing to record their next studio album when the pandemic hit and put those plans on hold. Unable to record in the studio with a backing band, the duo decided to try a new approach, recording every instrument themselves at Ellia’s parents’ home, which was sitting vacant just outside NYC. Working with just two microphones, the pair tracked ukuleles, guitars, vocals, glockenspiel, bass, pots and pans, breath sounds, a drum kit borrowed from Jeff’s brother, and the piano Ellia used to practice on as a child. They let the sounds of the house contribute too: the natural reverb of a long hallway, a ticking clock that became a percussion element, whistling that echoed in a tiled shower. The results are an extraordinary suite of songs that are haunted by the moments and characters they capture.

Charming Disaster was formed by Bisker and Morris in 2012, inspired by the gothic humor of Edward Gorey and Tim Burton, the murder ballads of the Americana tradition, and the dramatic flair of the cabaret. Together the duo write songs that tell stories, using two voices to explore dark narratives and characters with a playfully macabre sensibility.

In their critically acclaimed albums Love, Crime & Other Trouble (2015), Cautionary Tales (2017), and SPELLS + RITUALS (2019), Charming Disaster has explored death, crime, myth, magic, folklore, and the occult. In their theatrical live performances, they combine vocal harmonies and clever lyrics with ukulele, guitar, and virtuosic foot percussion, drawing listeners into a spooky, offbeat universe of paranormal romance, con artists, and ancient gods, playing out against a backdrop of nightclubs, car chases, circus tents, the afterlife, and beyond.

Charming Disaster’s music has been featured on the spooky hit podcast Welcome to Night Vale, they have toured with legendary cello-rock ensemble Rasputina, and their theatrical, entertaining live performances have captivated audiences across the United States. They have played festivals, bars and clubs, museums and art galleries, bookstores and libraries, and the occasional historic cemetery. They have appeared alongside storytellers, comedians, fire eaters, puppets, burlesque artists, poets, and circus performers. Recent appearances include Joe’s Pub at The Public Theater in NYC, Brooklyn’s historic Green-Wood Cemetery, the Rochester Fringe Festival, and the Coney Island Sideshow stage.