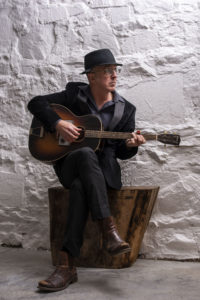 New Store No. 2 is the second solo album from Chris Maxwell, a quintuple threat: gifted songwriter, singer, guitarist, producer, arranger. He’s best known for the catchy, jagged junkyard rock he made with the legendary New York band Skeleton Key in the 90’s and more recent work as half of the Elegant Too production team. With the latter he’s composed and recorded music for hit TV series like the Emmy Award-winning Bob’s Burgers and produced artists like They Might Be Giants and Jon Spencer … as one does! New Store No. 2 is being released February 14 (Valentine’s Day!) by Max Recordings.

Maxwell wrote, recorded, and mixed New Store No. 2 at Goat House studio, adjacent to his home in Woodstock, New York where he’s resided for the past two decades. He was joined in the studio by the likes of Cindy Cashdollar, Rachel Yamagata, Marco Benevento, Amy Helm, Zack Djanikian, Conor Kennedy, David Baron, Mark Sidgwick, Jay Collins, Aaron Johnston, Jesse Murphy, Cheme Gastelum, and Larry Grenadier, among others, along with longtime collaborator Ambrosia Parsley.

Maxwell titled the record “New Store No. 2” after a song written about his maternal grandfather, K.J. Jamell, who came from Beirut, Lebanon and settled in a small town in Arkansas and opened a store there. The album has range and luxuriousness—a horn section, strings, lap steel, shimmering touches in the vocals, and — on occasion — utterly blistering guitar.  It contains both personal songs and what Chris terms “the pop songs.”

“Walking Through The Water” has a lush, spreading Bacharach-ian splendor; the song is about Maxwell’s troubled younger brother, who died last year, and the ways that an addict can bring nearly everyone down with him. “Cause and Effect,” describes a car accident, based on an actual experience Chris had as a teenager that resulted in the tragic death of the driver, his best friend.

Maxwell was born in Arkansas and cut his musical teeth in Memphis where he worked with legendary producer Jim Dickinson, Grammy winner John Hampton and shared stages with cult heroes such as Alex Chilton and Tav Falco and the Panther Burns. He was principal songwriter and clever guitarist of the Gunbunnies, the first band to be signed to a major label out of Little Rock, Arkansas. In the mid-90’s, he relocated to New York City and became an original member of the noisy, wired, perversely catchy Skeleton Key, appearing on two indie EPs and their critically acclaimed major label debut.

In the years since, he’s focused on writing and production as part of Elegant Too, a team responsible for creating the opening themes and/or scores for dozens of notable television series including Bob’s Burgers, Anthony Bourdain’s No Reservations, and Inside Amy Schumer. They’ve also created music for major motion pictures and countless commercials. In addition, they’ve teamed up with St. Vincent, Yoko Ono, They Might Be Giants, Iggy, Fiona Apple, A.C. Newman and many others.

Eventually, Maxwell felt the need to make music for himself again. He hunkered down in the Goat House to write and record, emerging in 2016 with Arkansas Summer, an album of wistful Americana filled with dark confessional tales from his childhood: artfully told stories of tragedy, triumph, abuse, addiction and redemption, all presented with indelible guitar hooks. Arkansas Summer received high praise from media outlets like Paste, The Oxford American, Nashville Scene and figures like Mark Maron. With New Store No. 2 he’s revisited those times and tales with still greater intensity and artistic acuity and created a small masterpiece.