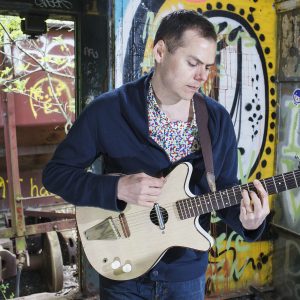 Life Our Own Way is the debut full-length solo debut from David Heatley, better known to the public at large for his work as a cartoonist and animation director. The album was recorded at Piety Street Recording in Henderson, Louisiana with additional recording done at Marigny Studios and House of 1,000hz in New Orleans, produced, arranged, and mixed by Mark Bingham (John Scofield, Glenn Branca, Rebirth Brass Band…). Contributing musicians include members of Lost Bayou Ramblers and Givers, plus Julie Odell, Sarah Quintana, Lilli Lewis and Tony Award-winner Michael Cerveris. Life Our Own Way will be available on all streaming and digital platforms February 11, 2022 from Dream Puppy Records.

Life Our Own Way contains fifteen songs, each telling a unique story in a unique musical style. Each started as a melody or lyric fragment hazily remembered from songs that were playing in Heatley’s dreams. During the initial lockdown of 2020, David felt a torrent of pent-up creative energy and wound up finishing a dozen of these dream songs, creating multi-screen video demos that he would post to his friends on Instagram and Facebook. When he sent these to Mark Bingham in 2021, along with a fan letter about the work Mark had done with legendary oddball musician Peter Stampfel, a correspondence began. Before long, Bingham invited him down to Louisiana to work together in his studio. Mark did some musical arrangement and assembled a fitting group of players, tailored to each particular track. Over the course of two weeks, the album was recorded and a couple months later, it was mastered and ready for release.

The title track on Life Our Own Way is a propulsive, jagged, New Wave-tinged, anthemic duet, celebrating adolescent freedom and the thrills of late night city life: “Something happens when we hold each other, move into the crowd…” Thematically reminiscent of “Young Folks” by Peter Bjorn and John. “On Your Side” is a simple, earnest, and tender ballad about protection, trust, and opening up again after a long period of being closed to the possibility of love. It has the warmth of 1970s AM Gold and wouldn’t be out of place in a Wes Anderson film: “If we take it slowly, I can offer you the whole me, I’ll be on your side.” “You Only Get So Much Time” is a Beatles-esque acoustic rocker which meditates on the bittersweet joy and brevity of life. As youthful and childlike in its open-heartedness as any of Heatley’s songs, there’s still a world weary core and even a dead serious urgency to the message: “We need to keep on living and loving…”

The other dozen songs explore themes of internet-fueled ennui, Jungian shadow work, disillusionment with spiritual highs, an acid-drenched tour of Hell, and, above all, what it means to stubbornly commit to and love another human being for life, remaining optimistic and hopeful along the way.