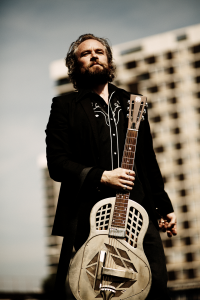 The circumstances under which these recordings were made seem as unlikely and exotic as the music they produced. After opening for Mark Lanegan’s Soulsavers as a member of Steve Gullick’s band Tenebrous, Duke and Mark became friends, tour mates and finally collaborators on the Black Pudding album; Duke provided the hushed, dusky musical settings. The work on Black Pudding went so well they finished a day ahead of schedule and on that leftover day, Garwood entered Pink Duck alone, and began work on the tracks that would become Heavy Love, capturing this musician at his peak.

“When I was young and pretty, I could’ve become a star,” reflects Garwood. “Luckily, I didn’t have any inkling to. I didn’t know what I was doing; I wanted to play music the way I wanted it to be played. That probably saved my life”. Instead he would embark upon the kind of character-building, detour-strewn route known only by the greatest artists and vagabonds. Along the way he formed deep connections with great musicians – from similarly quixotic souls like Lanegan, The Orb (adding guitar to “Perpetual Dawn”), and Josh T. Pearson – to distant legends Tinariwen and The Master Musicians Of Jajouka. Savages singer Jehnny Beth has also been a long-term admirer: “I met Duke at The Luminaire. He was playing sweet ballads with a tint of free-jazz; his voice was thin and full, like a Chet Baker turned into a midnight wolf. The first question was ‘who is this guy’?” It’s her delicate vocals that appear on Heavy Love’s haunting title-track, which you can hear on the new video made by Garwood and famed rock photographer Steve Gullick; you can view here:

What others have to say about Duke Garwood:

“I’ve listened to Duke for years but have not heard him as in control and powerful as he is on Heavy Love. His guitar playing and singing remind me of an unrequited and lusty relative of JJ Cale. I fucking love this.” Greg Dulli

“Duke Garwood is the real thing; like the perfect blues perpetually emanating good vibes thru a uni-vibe (even when he’s singing about darkness). An old soul and a saint…” Kurt Vile

“My brother Duke is the most soul-acious soul man I know. He’s always cut his own groove and it’s been my honour to play with him so many times.” Seasick Steve

“The entire record listening public should know Duke Garwood’s music. The fact most don’t is a fucking travesty. He’s a mystic, a musical genius and Heavy Love is a total mind-blowing masterpiece. Get with it people!” Mark Lanegan

Lend Me Your Ears

The Ballad of El Mollino (live)

The Ballad of El Mollino