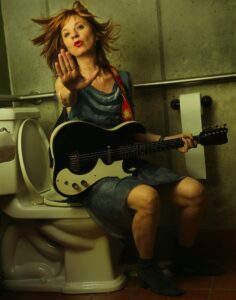 Singer / songwriter / violinist / actress extraordinaire Eszter Balint is releasing her long-overdue fourth album, I HATE MEMORY! The album was recorded by Andy Taub at Brooklyn Recording with additional recording by Kato Hideki and Bryce Goggin at Trout Recording, produced by Balint and Hideki. I HATE MEMORY! will be available as a digital download and via streaming services November 18 on Red Herring Records.

I HATE MEMORY! is a set of songs tracing Eszter’s journey from communist Hungary to ’70s-80s NYC by way of her parents’ radical theater group and winding its way through a Lower Manhattan mofongo of glamour, poverty, sex, drugs, darkness and yes, light. The songs were co-written by Balint and Stew (Stew & The Negro Problem, Passing Strange) and the lyrics dig fearlessly into oppression, freedom, the possibilities in chaos, the dreams and lost dreams of America, and the battles with memory when you are most invested in the now.These songs became the basis for an “anti-musical,” a theatrical production with songs based on an original concept by her and Stew. The anti-musical is being developed via an ongoing series of shows staged at Manhattan’s famed Joe’s Pub. Balint says I HATE MEMORY!  is an impressionistic travelogue with appearances by Family, Film, Fame, Immigration, Joy, Theater, Shame, Dance Floors, Open Doors, Papaya Ice Cream and The Shah of Iran’s Wife. (Note: the Shah of Iran’s wife is a crucial part of the live show but this spoken word piece did not fit the arc of the album.)

“My artistic education was first and foremost formed by growing up in an extended family of avant-garde theater makers from Hungary, who created adventurous, surprising works and devoted their lives to taking artistic risks,” recalls Eszter. “My father was one of the founders of the group, with my mother also involved for a time. We settled in New York in 1977 when I was 11, and sometimes set W. 23rd Street, where we lived and performed, a little bit on fire with our performances which literally spilled out onto the street through the storefront where we lived and worked. My home during these formative years was not only where the company created and performed their plays, but it was also an open and revolving door welcoming the most adventurous musicians, filmmakers, visual artists, performers, writers and painters of the time, as well as some of the renegades of hip hop culture. When we weren’t performing, our space would be transformed into a music venue where among other jazz and blues greats, bands such as The Lounge Lizards, DNA, Sun Ra, Defunkt, and The Contortions regularly performed.

“By age 13, I had taken on my role as the house DJ, spinning records between sets. I believe these years were a pivotal moment in defining my sensibilities; I carried the blood of Central European artists, with all their rich history, while during this time evolving into a full-fledged New Yorker, absorbing and integrating all around me with ease. It was during these formative years that I made my recording debut at age 15 playing violin on a track produced by artist Jean Michel Basquiat and featuring rapper Rammellzee. This life in the theater eventually also led to my being cast and appearing in films.

She continues, “In 1995, while living in Los Angeles, a place where I felt quite out of sorts, I decided to fully devote my artistic energies to music-making and the writing of words, more specifically to becoming a performing and recording songwriter.” Eszter has three albums out produced by JD Foster, Flicker (1999), Mud (2004) and Airless Midnight (2015), with her current album self-produced along with Kato Hideki.

Over the years Eszter has performed and/or recorded with numerous other artists including Tammy Faye Starlite, Marc Ribot, Elliott Sharp, Dayna Kurtz, John Zorn and Michael Gira of Swans fame. Eszter can be heard on violins on two Angels of Light albums as well as Swans’ The Seer, and on vocals and other instruments on multiple Marc Ribot projects including Ceramic Dog’s Your Turn, – a band she was a guest member of through 2009 – and on a subsequent album of Mr. Ribot’s songs.

In 2015 Eszter and Stew met through mutual friends and Stew suggested Eszter do a show about her life growing up in NYC during that special time that is of such interest to so many nowadays.  “But I hate nostalgia!” said Eszter. “That’s why you should do it,” was Stew’s reply.

I HATE MEMORY! is the result and it is Balint’s most ambitious project to date. It is an album, a story, a song cycle, a show, and a collection of poignant vignettes depicting a very special time and place. It is also an account of a teenagehood, albeit a fairly unusual one. It’s the place where Eszter meets and makes friends with her teenage self, perhaps for the first time, through song.