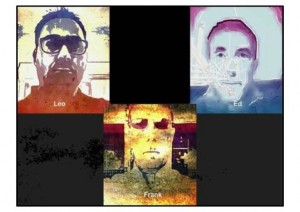 Dutch/American trio Fractal Mirror are releasing their second album Garden of Ghosts. The new album, produced by Brett Kull, was recorded with the band members collaborating remotely via Facebook, Facetime, Dropbox and e-mail. Garden of Ghosts is being released on Third  Contact, the  record  label  owned  by  Larry  Fast  (aka Synergy; long-time member of Peter  Gabriel’s original solo ensemble, and NYC session ace), being released in  physical  formats in North American and digitally  worldwide.

Fractal Mirror began work on Garden of Ghosts early in 2014 quickly learning to work long distance via the Internet. Drummer Frank Urbaniak wrote most of the lyrics while traveling and emailed them to singer/keyboardist Leo Koperraat and bassist Ed van Haagen who then composed the music. After keyboards, bass, guitars and primary vocals were recorded by Leo and Ed at Fractal Dust Studios in Holland, Frank’s drums, additional guitars by Kull and Don Fast, keyboards by Larry Fast and backing vocals by Brett were recorded at Catapult Studios in North Wales, PA.  The first time that the Dutch and U.S. members ever met was when Ed visited the US to assist with the mixing.  Other guests contributing to Garden of Ghosts include Amsterdam’s Stephanus Choir.

The resultant album contains 11 songs that share a dark, raw edge suggesting both the urgent post-punk of acts like the Psychedelic Furs as well as the ambitious stylings of contemporary outfits like The Decemberists.  Lyrics focus on how memories evolve over time, and how people connect and relate to each other in the maturing digital age.

The origins  of  Fractal  Mirror  can  be  traced  back  to  the  mid-80s  when  three  teenaged friends  from  Amsterdam  started  to  make  music  together  influenced  by  the acts on the  legendary 4AD  label  as well as  artists  like  David  Sylvian  and Japan.  Of the original three, Ed  and  Leo  continued  making  music  together  over the ensuing decades and then met Frank via an online music site and began tackling the  challenge  of  transatlantic creative communications  and recording, resulting in their debut album Strange  Attractors.

As Fractal Mirror begin work on their third album, also to be produced by Brett Kull, plans are being made the for Dutch members to travel to the U.S. and finally convene the whole band in the studio for overdubbing and mixing.