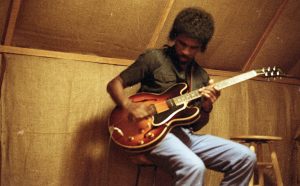 Orleans Records will be re-releasing The Story Of My Life, the Grammy-nominated debut album from singer-guitarist Guitar Slim Jr. on Record Store Day, April 22, distributed by Select-O-Hits. This will mark the album’s first-ever release on vinyl and its first re-issue on CD since the late 1980’s.

Slim Jr. aka Rodney Armstrong, the son of Southern Blues legend Eddie “Guitar Slim” Jones, was already few decades into his music career when he recorded the album. The sessions took place in New Orleans, in the summer of 1987, at Big Easy Studio on Paris Avenue.

Seven of the songs recorded came from the repertoire of Slim Sr., rounded out by renditions of soul hits by Tyrone Davis (“Turn Back the Hands of Time,” “Can I Change My Mind”) and Clarence Carter (“Too Weak to Fight”). Despite the album’s preponderance of Slim Sr. material, Jr. never wanted to ride his daddy’s coattails. “I just don’t want to lean on my daddy,” he says. “I’m supposed to. Everybody else doing it. Hendrix and them did it. Stevie Ray (Vaughan) and them did it.”

As a child, rubber bands served as strings for Rodney’s first semblance of a guitar. Huey “Piano” Smith, the songwriter-pianist who performed with Guitar Slim Sr. in the early 1950s, later gave Armstrong his first guitar amplifier. Earl King, the classic New Orleans rhythm-and-blues artists who modeled himself after Guitar Slim Sr., was the first to call him “Guitar Slim.” Slim Jr. made another connection to his father when he performed at the Dew Drop Inn with Oscar “Honey Boy” Moore, the drummer who’d been the third man in Slim Sr.’s early ’50s trio with Smith.  Rodney would be a fixture on the Black New Orleans club circuit for the next 20 odd years that led up to the recording of his debut album.

After its release, things started happening fast. In 1989, The Story of My Life was nominated for a Grammy in the Best Traditional Blues Album category. Slim opened for and befriended Texas blues star Stevie Ray Vaughan. He socialized with his daddy’s contemporary, Clarence “Gatemouth” Brown. He knew Prince and Johnny Winter; reportedly he did some recording at Paisely Park. Unfortunately, a wild lifestyle kept him from properly capitalizing on all this.

He has continued to perform live, but only entered the studio twice after The Story of My Life, releasing Nothing Nice in 1996 and Brought Up The Hardway in 2010.

Nowadays, he lives a quiet life in the D.C.  He thanks God he survived through his wild years. “The devil was trying get me, but Jesus didn’t let me go. He held onto me. Like he’s doing now.”

Meanwhile, the rest of us can enjoy this document of Guitar Slim Jr. at a point when the good Lord’s hold wasn’t quite so firm.