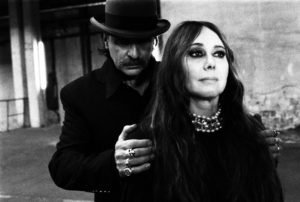 The Silver Threshold is the newest album from hackedepicciotto – Alexander Hacke (Einstürzende Neubauten / Crime & the City Solution) and Danielle de Picciotto (co-founder of Love Parade / Crime & the City Solution). The Silver Threshold is released on Mute on vinyl, CD and digitally. Vinyl and CD editions are in a gatefold sleeve with silver finish.

Listen or download here (this Soundcloud link is set to allow either):

The Silver Threshold, their “most symphonic” album to date, is expansive and exploratory, reflecting the endless movement across places, landscapes and environments the pair have experienced. They glide across genres that take in cinematic drone, industrial, experimental, spoken word and soundscapes that shift between immersive ambient into noisy eruptions. “It has this largeness of the situation that we’re all in,” says De Picciotto. “hackedepicciotto albums have always been reflective of their environment and this is no different.”

Alongside beauty and tenderness, there’s also the uncertainty of the world mirrored throughout the album. This feeling of being in the middle of the unknown, where uncertainty impends, plays a significant role. “These restrictions and the necessity of confining oneself gave me a sense of the potential,” says Hacke. “It actually gave me a kind of weird euphoria. We had the distinct feeling while we were working that we were standing on a threshold. That it was neither the time before the pandemic or post-pandemic. I think we both really felt the potential of that, that we were at this gateway.”

Ultimately though, what is at the heart of The Silver Threshold – and hackedepicciotto as a project – is the ability of Hacke and De Picciotto to channel their lives and experiences into a joint yet coherent artistic expression. The work of two people with a deep-rooted intuitive and creative bond. “We live in total symbiosis with each other,” says Hacke. “Danielle and I experience everything together and that goes straight into our albums.”

‘Kirchhain’, is the most recent track taken from the album. A stirring, immersive soundscape piece – the track is being launched with a video capturing the cover and photoshoot, the music perfectly capturing the industrial setting colliding with the scope and beauty of natural light: https://youtu.be/3YKAD7HIsgA

Shot by the photographer and notorious bouncer at Berlin’s Berghain, Sven Marquardt, Hacke goes on to explain “It was a very formative aspect of this album. He only uses natural light and having our picture taken by him was a very special experience.” It even ended up informing some of the ideas and themes. “We did the picture for the cover before we recorded the album so that really influenced us,” says De Picciotto.