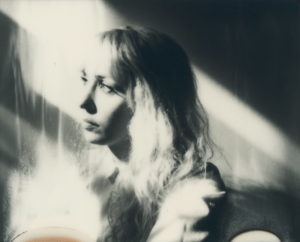 HEAZZA is the eponymous debut from this Chicago-based singer / songwriter, a recipient of the 2018 Individual Artist Grant from her hometown. Its six tracks were recorded and mixed by Noam Wallenberg at Chicago studio, Rax Tracks, and co-produced by Wallenberg with B Forest. HEAZZA is being released October 4 on the Audible Paint label.

Her live performances are notorious for their exotically tailored ensemble sound and haute couture visual aesthetics.

HEAZZA is the musical dramatis persona of Heather Leonhardt. She was born and raised in a conservative family in Grand Rapids, Michigan along with four brothers and a sister. She studied clarinet in grade school and made first chair in the student orchestra. In high school she started singing lessons, trained Classically and contemplated a Music major in college. During college, she studied abroad meeting her future husband in Frankfurt, Germany, soon moving back to the U.S. with him and settling down in Chicago.

Normal full-time jobs proved unfulfilling and she returned to music, studying piano, guitar and songwriting. Eventually she began hustling gigs with the best Jazz musicians she could find on the local scene – primarily to force herself to develop the skills to perform with them without embarrassment! The result receiving an Individual Artist Grant from the city of Chicago…and now HEAZZA.