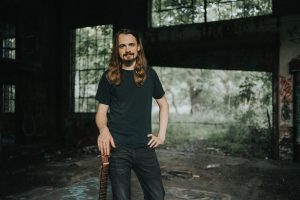 Lifetime Ago Motel is the fifth album from veteran New Jersey-based band-of-one, KEITH KENNY. It was written over a three year period and recorded at his Studio 303 facility in Monroe, New Jersey, self-produced by Kenny. Among special guests contributing is drummer Sim Cain (Regressive Aid, Gone, Rollins Band, Dean Ween Group). Lifetime Ago Motel is being released by iNtuRecords April 2 as a digital download, physical CD, 12” vinyl LP and via streaming platforms.

Most of the new record was written while Kenny was on the road promoting his last, self-titled album which was produced by 3-Grammy winner Justin Guip (Hot Tuna’s touring drummer and sound engineer for the late Levon Helm). What should have been a victory lap that included dates opening for The Dean Ween Group was filled with stress and anguish. Kenny had recently married, but time spent away from his new wife strained the marriage to its breaking point; the economics of modern day touring had Kenny barely breaking even despite scoring impressive gigs from coast to coast, including a residency at the House of Blues in Las Vegas, and weekly appearances at Dean Ween’s “Invitational” jam nights in New Hope.

By the time Kenny hit the road with Deaner, his life was in shambles. Although he was supposed to be promoting his latest album, the new songs addressing his sad state came pouring out and immediately went into his stage show.

As Kenny recalls, “‘Move Along’ was one of the first songs that I tried out on the road. It was my way of facing the reality of being on my own and trying to look at the silver lining.  ‘Broken Misery’ was inspired by TOOL’s ‘Aenema’ which I’d been covering around that time; the melody is repetitive and trancey, the lyrics are dark and sad. It’s a blend of the Nine Inch Nails industrial sound that I love with my style of percussive guitar playing and drum loops. ‘Burr’s Roach Jam’ evolved out of Deaner’s weekly jam nights at John & Peter’s.  We would jam on this riff every week and it seemed to get better every time!”

When Kenny got back home, he began tracking the songs using what he had learned from working with Guip to produce himself. This project wound up being especially personal, so he felt it was more appropriate to take control of all aspects of the recording – which proved incredibly cathartic. As Kenny says, “The whole process of this album felt like a whole lot of life happened.”

Kenny’s story began over a decade ago with his first shows at Asbury Park’s legendary Stone Pony setting him on the path to developing a unique approach to his live shows: Kenny recreates the sound of a full rock band line-up playing acoustic guitar with an unusual, percussive finger-picking style, creating rhythmic loops on the fly and adding atmospheric texture via an array of effects pedals. The finishing touch is a vintage red suitcase (dubbed “The Big Red Suitcase”) he uses as a kick drum.

Over the years, Kenny built fan bases throughout the United States and abroad with multiple tours the world over including performances in Southeast Asia organized by Aqua Survey who search out unexploded ordnance, raising awareness of this problem. He has shared stages with the likes of John Butler Trio, Keller Williams, WEEN, The Dean Ween Group, Leon Russell, John Hammond Jr., New Riders of the Purple Sage and John Kadlecik (Further & Dark Star Orchestra), impressing all involved with his high energy, expert, super-infectious playing and songwriting.

Lifetime Ago Motel is an incredibly potent summation of his artistic and personal growth to date. Kenny looks back on its creation and observes, “By the end, I felt like a different person.  A little scarred, but also a little stronger. Change is inevitable and this album is a portrait of someone accepting change. On the last few days of tracking the album, I was struggling to finalize lyrics to the still-untitled track ‘A Lifetime Ago.’  Those were the last words written for the record.”