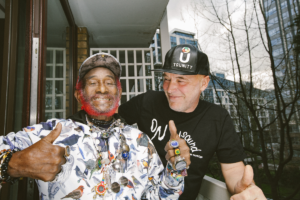 December 6th 2019 sees the release of the dub companion to the critically-acclaimed Rainford album which came out in June 2019. On Heavy Rain, the Upsetter and co-producer Adrian Sherwood have produced a radical bass heavy re-version of the original tapes with a host of guest musicians including Brian Eno and Vin Gordon.

As well as highlighting the deft musicianship of the original backing band on the Rainford sessions (which include core On-U luminaries from Creation Rebel, Tackhead and Dub Syndicate) these re-works also invite some further players into the cosmic mix. Brian Eno makes an unexpected right channel entry into “Here Come The Warm Dreads”, a heavily processed sound system overhaul of Rainford highlight “Makumba Rock”, cheekily re-titled as a nod to Eno’s own debut solo album. This completes a circle started in 1981 with African Head Charge’s My Life In A Hole In The Ground similarly referencing the contemporary collaboration between Eno and David Byrne, and their “vision of a psychedelic Africa”.

Elsewhere, legendary trombonist Vin Gordon (one of the hornsmen on Bob Marley & The Wailers Exodus amongst many other classic sides) lends his distinctively woozy blowing to tracks such as “Rattling Bones And Crowns” (a late night flipside to “Kill Them Dreams Money Worshippers”) and “Crickets In Moonlight” (“Cricket In The Moon” refracted through some beautifully louche late summer heat haze lens). The likeliest contender to a title track, “Heavy Rainford” strips back the narrative from “Autobiography Of The Upsetter” to ride the rhythm with all sorts of mixing desk tricks, anchored by the killer “I Am The Upsetter” hook from LSK.

It’s important to note that it’s not all Rainford re-works though: “Dreams Come True” and “Above And Beyond” are Scratch and Sherwood originals, heard here for the first time and equally strong material for this purple patch in the career of an unstoppable Jamaican maverick and true musical pioneer.

“Rainford is a late-career answer to 1978’s Roast Fish, Collie Weed & Corn Bread and beyond all reasonable expectation, fully its equal” ★★★★★ – MOJO

“The tandem of Perry and Sherwood saddling up again elicits some of Sherwood’s furthest-in-leftfield productions and Perry’s most affecting musings.” – NPR

“After years spent trading on a bulletproof back catalog and eccentric persona, the Jamaican titan teams up with UK dub heavyweight Adrian Sherwood for a welcome return to form.” – Pitchfork

“On Rainford, Adrian Sherwood brings a sense of control and confidence, providing the perfect environment for Perry to remind us why he was so special in the first place.” – The Guardian

He began making music in the late 50s for Clement Coxsone Dodd’s label. Following a stint at Joe Gibbs’s Amalgamated Records, Perry formed his own imprint, Upsetter, in 1968.

In the early 1960s, Lee’s mixing board experiments resulted in the creation of dub. He is synonymous with his innovative production techniques and renowned for his studio band The Upsetters.

He was instrumental in launching the career of Bob Marley, producing many of the pre-Island Records Wailers sides, and working with him sporadically throughout his entire career, including 1977’s “Punky Reggae Party”, the same year that Perry worked on a session with the Clash for their “Compete Control” single.

In 2003 he won the best reggae album Grammy for Jamaican E.T.

Lee’s song Enter the Dragon was sampled by Panda Bear from Animal Collective. He was then selected by A.C. to perform at All Tomorrow’s Parties, which the band curated in 2011.

Rolling Stone Magazine featured Perry in their list of the 100 Greatest Artists of All Time. Although 82 years old, Lee is fit, sprightly and plays live on a regular basis to rapt audiences around the world. He divides his time between Jamaica and Switzerland.

“Someone once described me as just a fan who’d got his hands on a mixing desk, They were probably trying to be nasty, but I took it as a compliment – that’s exactly what I am!”

For over 40 years now, forward-thinking sound scientist and mixologist Adrian Sherwood has been dubbing it up, keeping the faith when others have fallen away and blowing minds and speakers alike.

Producer, remixer, and proprietor of the British dub collective/record label On-U Sound, Adrian Sherwood has long been regarded as one of the most innovative and influential artists in contemporary dance and modern reggae music. His talent for creating musical space, suspense, sensations and textures have enabled him to pioneer a distinctive fusion of dub, rock, reggae and dance that challenges tradition not only in roots circles, but also in the pop world at large.

“I’d rather try and create a niche amongst like-minded people, and create our own little market place be that 5, 50 or 500,000 sales and also be true to our principles of making things, and to your own spirit that you put into the work.”

All of these early records, according to Rock: The Rough Guide were “phenomenal, generally bass-heavy with outlandish dubbing from Sherwood, who worked the mixing desk as an instrument in itself.”

Long influential and innovative on the UK reggae scene, Sherwood’s distinctive production style soon began attracting interest from acts outside of the dub community and by the early-’80s Sherwood was among the most visible producers and remixers around, working on tracks for artists as varied as Depeche Mode, Primal Scream, Einsturzende Neubaten, Simply Red, the Woodentops, and Ministry. He became increasingly involved in industrial music as the decade wore on, producing tracks for Cabaret Voltaire, Skinny Puppy, KMFDM, and Nine Inch Nails, and although On-U Sound continued to reflect its leader’s eclectic tastes, the label remained a top reggae outlet.

In 2003 he launched his solo artist career with Never Trust a Hippy, which was followed in 2006 by Becoming a Cliché. Both were released by On-U in conjunction with the Real World label.

Still one of the most sought-after producers in the contemporary music industry, Adrian Sherwood and his progressive style and interest in developing new ideas continue to propel On-U Sound’s ongoing success. In 2012 he issued his third solo album Survival & Resistance, and began an ongoing collaboration with Bristol-based dubstep don Pinch. This brought two different generations of bass together and in 2015 the pair released their debut album Late Night Endless. Behind the mixing desk he has been working with the likes of Roots Manuva, Clinic and Nisennenmondai; and delivered remixes of Congo Natty, Peaking Lights and Django Django. His production and remix works has also begun to be anthologised by On-U Sound with the critically acclaimed Sherwood At The Controls series.

“Music is lovely because it stimulates people, superficial music doesn’t. If you make something that you put your heart and soul into and really try to push it so it leaps out the speakers at you, and if there’s a good feel to it, then you’ve achieved something.”