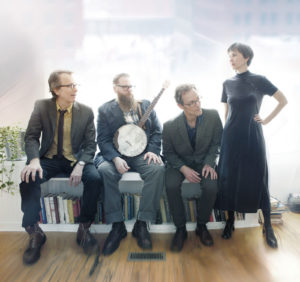 When I Was a Writer is the full-length debut from former Trip Shakespeare leader Matt Wilson’s latest project “Matt Wilson & his Orchestra.” The album was recorded at Wilson’s home studio, produced by him and mixed by John Fields (Soul Asylum, Miley Cyrus, Jonas Brothers, Switchfoot, Rooney, etc.) at Creation Audio. When I Was a Writer is being released by Chicago’s Pravda Records March 20.

Wilson explains the genesis of the new album: “I wrote the song ‘I Can’t Return’ in the Summer of 2015 and that was my return to songwriting after a few years away. After that there was just an outpouring of music and words that lasted for about three years. During that time I was definitely excited to feel this inspiration, but I also felt desperate. In a way the whole record is a reaction to death. I had this strong sense that I was running out of time. I was sincerely worried that I might lose my mind before I was able to show the world the way I wanted my music to sound.”

The harp mastery of inventive collaborator Phala Tracey is a key element of the ensemble’s overall sound. Phala and Matt’s playing is underpinned by the sparkling banjo groove of Quillan Roe who is best known for his work with the Roe Family Singers, winners of a prestigious McKnight Fellowship. The sunshine tones of harp and banjo are rolled out on a wide road of Jacques Wait’s electric bass and Wilson’s own acoustic guitar and piano playing.

The arrangements on When I Was a Writer are built upon the orchestra’s organic but percussive instrumentation. Acoustic guitar, piano, harp, banjo and electric bass guitar produce a feather bed of circular rhythms, cascading arpeggios and reverberant sonic swells.  “I Can’t Return” has breezy acoustic verses that intensify as they ascend to anthemic choruses pillowed with rich background vocals. “Decent Guy” boasts waterfalling rhymes underpinned by a spare and funky bassline and crisp beat laid down by, banjo and clipped acoustic guitar, while the harp shimmers like a recurring dream. The title track feints at being folk music, but unleashes verses filled with continually modulating chords and choruses resounding with vocal pyrotechnics.

Raised in St. Louis Park, Minnesota, Matt became a fan of rockers like Elvis Costello, Bruce Springsteen and Devo. He and his high school friends formed a group called The Panic and spent much of their youth as under-aged performers in Minneapolis nightclubs, warming up for future luminaries such as Husker Du and The Replacements. In the early 80s, Matt followed his brother Dan to college in Boston where they formed a number of bands, including the Love Monsters, marking Matt’s first turn as a lead singer. Returning to Minneapolis, the brothers joined forces with bass player John Munson to form Trip Shakespeare, writing, recording and touring together for a decade. John and Matt still perform in a rock band together, The Twilight Hours.

Matt’s been featured on MTV, Rolling Stone, The New Yorker, Spin, The Toronto Star and many other influential media outlets. Trip Shakespeare’s single, “Toolmaster of Brainerd”, was named by one of Minnesota’s 50 Greatest Hits, and the group was included by top Non Comm station The Current’s list of “893 Most Essential Musical Artists of All Time.” Throughout Matt’s career, his songs have been played heavily  on tastemaker radio stations like The Current, around the country. Throughout  his career the goal has remained constant. “Above all, the most important purpose of my music,” Wilson explains, “is to help people who are wandering through the dreariness of life to break through to a release of emotion.”