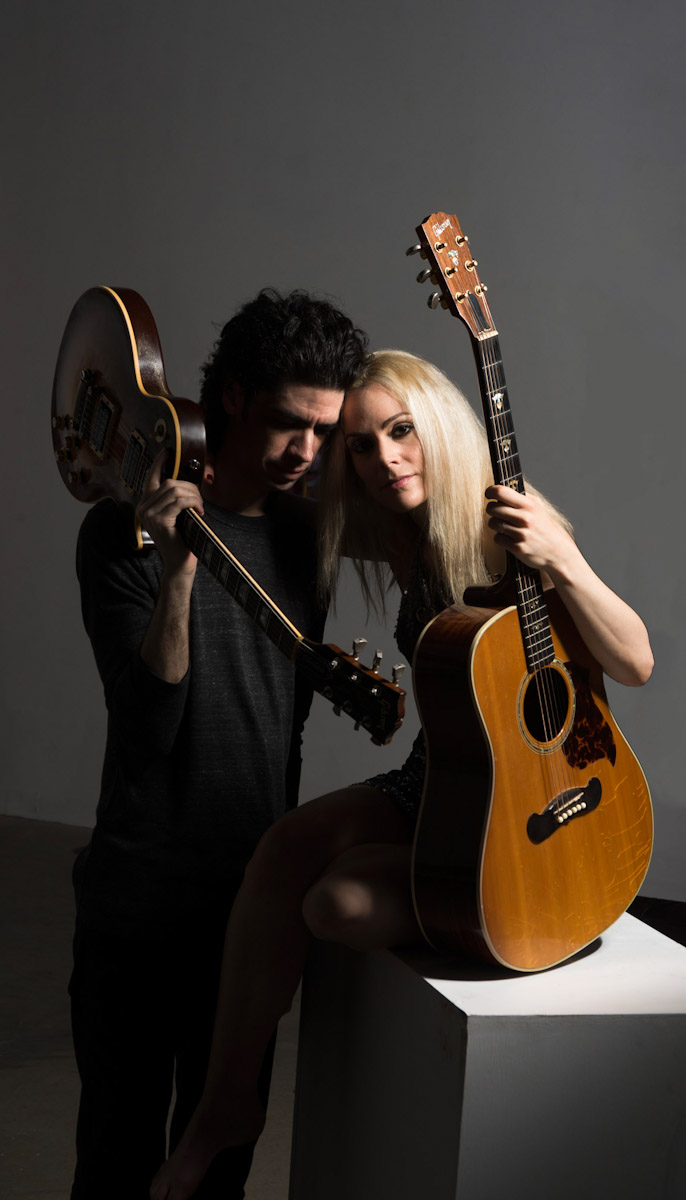 No Resolution is singer / songwriter / musician Michal Towber’s eighth studio album, and her first partnership/collaboration with guitarist/saxophonist AR. The album was co-produced by Towber and Kazim Zaidi, and recorded in his home studio in Freehold, NJ. It was mixed by Dae Bennett and mastered by David Kowalski.

The inspiration for No Resolution came from a dark time in Towber’s life. She had given up a career in corporate law, and her musical aspirations, to move to the suburbs and raise a family, only to find herself extremely isolated, lonely and unfulfilled. She started writing songs again “to save myself from annihilation,” she says bluntly.

Besides writing all the material, Michal contributed lead and backing vocals, most of the keyboards and some acoustic guitar. AR played guitar on “Let Me Down Easy,” “Before Tonight,” “Bittersweet” and “Secret Song” and composed the latter two. AR heard a lot of these songs when they were first demoed or written and gave her very detailed advice throughout the writing and recording processes. Zaidi performed or programmed all the drum and bass parts, provided most of the guitars and some keyboards. “The Crash,” features a guitar part composed by the late Scott Putesky aka Daisy Berkowitz of Marilyn Manson, Towber’s longtime friend who passed away of colon cancer in 2017. The demo of “The Crash” is the last known recording by Putesky.

Michal and AR met through mutual friend Robin Finck in 2003 and perform live as a duo, playing original repertoire and a few specially arranged covers. “We were pen pals for 14 years,” Michal says of their partnership. “My music has lived in his head, and his thoughts have lived in mine for all of that time. We were best friends before I ever heard his voice or saw his face. He could have been a hologram or living on the moon. It’s a very intimate way to get to know someone; through their ideas and the content of their soul.”

Emmy-winner Towber was born in Ashkelon, Israel, and raised in NYC. She is a classically trained pianist and self-taught guitarist who graduated from Yale University and Columbia Law School. Fellow Hunter High School alum Lin-Manuel Miranda (“Hamilton”) recently tweeted that she was “always the most talented person in our class.”

Michal released her first record at 17, Sky With Stars on Columbia. The album was co-produced by Towber and Soul Asylum front man, Dave Pirner. Supporting the release, she performed at the Rock and Roll Hall of Fame, and opened shows for Soul Asylum and Patti Rothberg. The song “My Friend” was featured on Delia’s In Your Head sampler and played in movie theaters nationwide; “Broken Boy” appeared in Dawson’s Creek.

Her sophomore effort, Coma (2002), was produced by Joe Simon (keyboardist for Billy Idol and Fiona Apple). Robin Finck, of Nine Inch Nails, lent his guitar skills to the song “Alive.” Multiple tracks appeared on ABC’s One Life to Live. “Life without Me” appeared in HBO feature film Kiss the Bride.

In 2005 Michal released Desireless. Her song “Perfect” was featured in the HBO film Jack and Jill vs. the World and Lifetime’s True Confessions of a Go Go Girl. “Lovesick” appeared in the film Dark Rising. “Happy Feeling” was included in a Take Five/Diet Coke podcast, the movie Duck Farm No. 13, and Lifetime’s Matters of Life and Dating. The track “Desireless” was included on New Arrivals Vol 1: Artists for Hurricane Relief, a Hurricane Katrina benefit album. Towber was the face of Urban Decay’s make-up palette “Face Case,” and “Big Bang” lip gloss was named after her. She was nominated for five Emmys, winning one this same year for her work on One Life to Live as part of the composition team led by music director Paul Glass.

Michal collaborated with producer/songwriter Dave Liang of the Shanghai Restoration Project in 2008 on the song “Pace of Light” which showed up on the album Stories of a City. In 2009 they collaborated again on “ToyLand,” a song included on Undercover Christmas, Vol 1. The following year, Towber’s version of the NY1 theme song was profiled in a half-hour television special. She also put out Lifesblood in 2009. The song “Nothing Makes Sense” was chosen by the blog TwilightersAnonymous.com as a “New Moon Monday” staff pick. In 2010, Michal worked with producer Jamahl Richardson of Seven Day Visa on a remake of a 1930s song “The Baseball Song” for the baseball documentary “Diamonds Are a Girl’s Best Friend.”

The year after, Towber collaborated with Dave Liang, and Sean Han of the band Blip Blip Bleep under the group name “MagiCat.” They released the Up the Rabbit Hole EP, a fantastical reimagining of the classic fairy tale Alice and Wonderland as told from the point of view of the Cheshire Cat. The EP reached the top 20 of iTunes’ Japan Electronic Chart, and the cut “Jabberwocky” reached the top 20 of iTunes Japan’s pop charts. The title track appeared in the Warren Miller Xtreme-skiing film Like There’s No Tomorrow, a North America-wide Canon television spot, as well as ads for the Oona, Slingbox, Sonos and EF Educational Tours.

2012 saw Michal release One Immortal Day, produced by Jamahl Richardson. The music video “Vampire” aired internationally. Sadly, that year also saw the passing of her musical mentor, Don Devito, after a long struggle with cancer. She performed at his memorial service along with Roseanne Cash and Billy Joel.

Three years ago, Towber released a best-of compilation, with previously unreleased tracks, entitled Lovesick. Earlier this year, Michal contributed the song “Outside” to the soundtrack of Netflix’s When We First Met in collaboration with The Practice Worldwide. Her song “Tissue Paper Wings” appears in the award-winning documentary “A Castle in Brooklyn, King Arthur.”