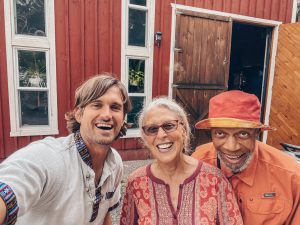 Circle Of Celebration, a collaboration between composer Christopher Bono’s NOUS ensemble, ambient music mainstay Laraaji and fellow sound healing musician Arji OceAnanda, is the fourth and final album to emerge from the NOUS: A Musical Rite recording sessions that took place at Dreamland Studios, in Hurley NY. The album will be released by Our Silent Canvas as digital download and via streaming services on November 12.

Spending time in the company of Circle of Celebration is a transcendent experience. The album has a warm, enveloping tonality that forces deep and uplifting contemplation. It’s impossible not to be moved by Laraaji’s distinctive zither technique on pieces like ‘In This Light’, where his playing is surrounded by Christopher’s plaintive piano melodies and tranquil water sounds akin to suikinkutsu.

Elsewhere, a beatific, gauzy almost dubby warmth pervades the naïve melodies on ‘Of Common Origin’, while the sudden introduction of Laraaji and Arji’s arresting laughter ushers in a truly heart-warming conclusion to the piece; the gently phasing, subtly percussive opening piece, ‘Into Nousness’ and the mystique-heavy ‘Through The Veil’ seem to embody the idea of a searching, open-minded approach to creation.

Circle Of Celebration is fronted by three beings whose lives have been forever changed as a result of their own unique journeys through sound, meditation and Eastern practices, and yet it is an album that can be appreciated irrespective of where you find yourself on your own spiritual path. The album is grounded by the spontaneous rhythms and diverse textures created by the talented ensemble of musicians that encircled these three friends throughout this extraordinary recording session.

“I think the theme of the circle and celebration that runs through what we created on that special day in Dreamland is really important,” reflects Laraaji. “A circle is endless, and we wanted the listener to feel like they’re in this circle with us, in a joyous, ritualistic celebration. To me, these pieces feel like an invitation to look at what’s going on in your life – or has gone on in your life – that’s worthy of celebration while you’re listening to this album.”

Into Nousness: a brief history of NOUS & Circle Of Celebration

NOUS: A Musical Rite was conceived by Christopher after years of working on his expansive Bardo project.  The experience of composing and producing Bardo left Christopher yearning to design a project that deeply explored improvisation with a select group of musicians and to physically perform on instruments with other people again, live and in the moment. This intention spawned the idea of NOUS and pushed him to explore new composition methods and techniques based upon improvisation.

At the outset, he invited 15 talented musicians and three dancers to participate in an experiment with him at the historic Dreamland Studios in upstate NY. His idea was to place some of the strongest avant garde players into an unfamiliar setting, following a disciplined, ritualistic daily routine informed by sound meditation; in so doing, the idea was to develop a unique setting that would provide the perfect catalyst for creating inspired and spontaneous music together.

“I began by creating a booklet of seed ideas and pieces exploring a spectrum of improvisational possibilities. I then designed a schedule that incorporated sound practices, yoga and meditation techniques surrounding timeslots devoted to investigating each musical idea. Once the shape of the project started to emerge, I set out to recruit a brilliant group of musicians to be a part of it,” he remembers. After some formative initial discussions with producer Kevin McMahon (Swans, Real Estate, Titus Andronicus), the core NOUS ensemble became Christopher, McMahon, Thor Harris (Swans, Angels of Light), Greg Fox (Guardian Angel, Ben Frost), Shahzad Ismaily (Yoko One, Laurie Anderson), and Grey McMurray (itsnotyouitsme, Tyondai Braxton). The sessions also included guest appearances by Anthony Molina (Mercury Rev), Imago (Múm), Caleb Burhans, Clarice Jensen, Laura Lutzke, and Alex Sopp from ACME Ensemble and yMusic, and Cecile Hafstad (Gabbarein).

You can hear the results of this on the three NOUS albums that have been released to date, together documenting the first three-and-a-half days of Christopher’s five-day experiment. On the afternoon of the fourth day, Christopher invited Arji and Laraaji to join the session. The results of that day became Circle Of Celebration.

Christopher met Arji and Laraaji when he attended Ananda Ashram, near Monroe NY in November 2013, connecting with them over the work of Vietnamese Zen monk Thich Nhat Hahn. “An unbelievable amount of good has come into my life because of Thich Nhat Hanh,” he says. “As someone who holds this kind of deep appreciation, when you start talking to someone else who has a similar reverence, the heart lights up and an immediate connection is forged in that exact moment. That’s how I felt when I started talking with Arji and Laraaji.”

Laraaji has been present in the world of ambient music ever since Brian Eno spotted him performing with a manipulated zither on a street in late-70s New York City. Eno invited Laraaji to contribute to his formative Ambient series with 1980’s jubilant Day Of Radiance. From that moment on, Laraaji became a powerful force in blending techniques familiar from Eastern faith structures with introspective, stirring music that was both distinctly identifiable as his own, but also part of a wider consciousness that extends back through human existence.

Given his prolific output and its resonant effects on the listener, Laraaji became an important figure in the world of sound healing, the ancient technique of using sonic vibrations within meditative and therapeutic practice. Each July he would perform and teach at a ten-day event in Colorado with the International Sound Healers’ Institute. In 2008, one of the attendees invited to the event was Reiki master and sound healing practitioner Arji OceAnanda. Her invitation was accompanied by an emphatic insistence that she seek out Laraaji while she was there. The pair have been collaborators ever since.

“They emerged as these protector beings,” muses Christopher about the moment Arji and Laraaji entered Dreamland. “Wherever they go, they just bring this amazing sonic light. They just lifted us all up, as they always do. It was cosmic magic.”

Arji’s practice in sound healing and Laraaji’s laughter meditation techniques together formed an important component of that cosmic magic. “Laughter is a sound with a specific vibration,” explains Arji. “It’s a pure sound that bubbles up out of your spirit. To me, it always makes sense to utilize it as part of any practice where your intentionality is either healing or upliftment.”

Laraaji bountifully shares laughter wherever he goes, and you hear it across the whole of what became Circle Of Celebration. He exudes a powerful, captivating serenity that makes it easy for people to feel completely relaxed around him, including into the NOUS sessions on that fourth day at Dreamland. He has offered his laughter meditation workshops all around the world, typically accompanied by Arji. “The sound of laughter can impact an individual or a whole audience, and it can completely alter what might otherwise be a very serious, conscientious performance,” says Laraaji. “Why not include that as part of a musical or sound experience?” That laughter, arriving unexpectedly as it often does on Circle Of Celebration, is part of what gives these ten pieces such a euphoric, rapturous outlook. You may not expect it, but it is immediately uplifting, especially in the moments where Laraaji’s strident voice is joined by those of Arji and Christopher. Its arrival feels a lot like sunlight bursting through clouds, creating a sense of warmth and vitality in pieces that are already overflowing with these qualities.

Christopher found a quality in Arji and Laraaji that he could completely relate to, leading to the coherent, endlessly changing textures and atmospherics that can be heard on pieces like ‘Ascending’. “I went through my own journey of sound healing before I met them,” he says. “The Bardo project was informed by a year of studying with sound healers, many of whom Arji and Laraaji know well. That led me to investigate the ritualistic sound concepts of indigenous people. To me, the whole NOUS project is very much like a primitivist art project. I love the idea of primitivism in music, and I think this comes through clearly on Circle of Celebration.”

The sound healing concept of intention is important to appreciate in the context of the sessions that yielded Circle of Celebration: none of this was planned; none of it was discussed in any great detail in advance; it was created by musicians with hundreds of years of experience between them, but executed with the perfect embodiment of a beginner’s mind, almost as if they are creating together with nothing other than instinct and intention.

“Sound plus intention equals healing,” says Arji, in conclusion. “You can have the most amazing voice or be the best musician in the world, but if your intention isn’t pure, the sounds you create could harm rather than support healing. What we created together on that day at Dreamland absolutely came from the purest of all possible intentions.”