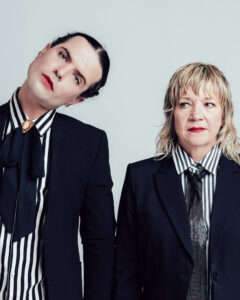 The Asbury Park-based songwriting team of former Psychic TV bassist Alice Genese and Shaune Pony Heath, who operate as Ov Stars are releasing their debut, Tuesdays. The five-song EP was produced, engineered and mixed by Jeff Berner, another alumnus of Psychic TV, at Studio G Brooklyn and Palace Of Sports. Tuesdays will be released as a download and on streaming platforms April 23, with a limited edition colored vinyl coming later in the year.

Through an introduction by Alice’s brother, the pair began a friendship which grew over the years.  Both being musicians, they soon began writing songs together and found a musical kinship. After many months of meeting on Tuesdays to write they decided the obvious next step was to record.

When the time came to find a producer for this record Alice suggested friend and former Psychic TV band mate Berner. Jeff is a producer as well as a multi-instrumentalist who works out of Studio G in Brooklyn.  It seemed to be a no-brainer since Genese and Jeff had years of experience working alongside one another; there was already an established bond and deep sense of trust. Berner is fearless in his production style, performing on a variety of unusual instruments and employing innovative studio techniques to get the sounds he envisioned.  It was not uncommon to hear the phrase “let go and let Jeff” throughout the recording process.

Genese spent the better part of two decades as the bass player and co-writer in Psychic TV, an internationally acclaimed ensemble fronted by the late singer/cultural engineer Genesis Breyer P-Orridge.  Since joining in 2003, Alice recorded and toured extensively with Psychic TV until the group ended, and her writing and playing is featured on all their releases from this period.

Hailing from the great city of Hoboken, NJ, Alice’s first musical experience was with Gut Bank who released The Dark Ages on the iconic Coyote Records label and was featured in WNEW-TV’s special, The Hoboken Sound, along with The Feelies, Chris Stamey and The Cucumbers. Her next band was Sexpod who released two album, Home and Goddess Blues.  In 2014, Genese recorded her first solo outing titled Sticks and Bones, produced and mixed by Jeff Berner.  Sadly, shortly upon this EP’s completion, she tragically lost her only son Jesse, who had played bass on the project. Ov Stars is her first musical venture outside of Psychic TV since that time.

Shaune Pony Heath hails from beautiful South Africa where he grew up living on a smallholding on which his grandfather ran a plant nursery. Some of the first encounters he had with music were listening to women singing and harmonizing as while going about their daily tasks at the nursery. He began playing piano in his grandmother’s front room at family gatherings where he would play around with it while the rest of the family was in the dining room.  Soon after, he was enrolled in formal lessons and at nine years of age his grandfather bought him his very own piano.

All through primary school, he was urged to sing in the choir and participated in singing competitions as a solo singer as well as other fine art competitions. When the time came, he was sent to a high school for the Arts as a Drama major. After completing high school early, he started studying Fashion Design.

Having always wanted to live in the United States he made the move when he was 23. Initially landing in New York City, he eventually made his way to Asbury Park. Having gone through the immigration process during a difficult time in national politics, Pony has never stopped, and is still working on music and art.

Ov Stars will be performing at Transparent Danny Clinch Gallery in Asbury Park, NJ on

Ov Stars will be playing a live performance as part of the We Are But One – Breyer P-Orridge exhibition at Pioneer Works in Brooklyn on June 30, 2022