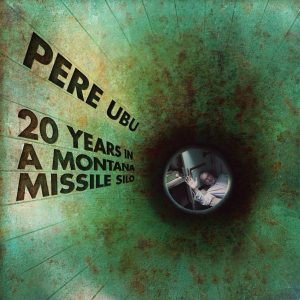 Pere Ubu’s new album 20 Years In A Montana Missile Silo opens the doors of the avant-garage to reveal the hardworking mechanics hammering away at the fundamentals of blue-collar rock. A three-guitar revision spans the state of the art for guitar-based rock in the year 2017. Keith Moliné is joined by Cleveland guitar legend Gary Siperko and Kristof Hahn in the now familiar orchestra of analog and digital synths, clarinet, drums and Thomas’ unquestionably unique vocals. 20 Years In A Montana Missile Silo is being released September 29 by MVD.

It follows on from their release in 2015 of ‘Carnival of Souls,’ which was widely praised by the media, confounding the usual clash of critics’ sensibilities, and chosen by cult series ‘American Horror Story’ to provide two soundtracks for characters Mordrake and Twisty, in Season 4.

David Thomas says ‘To my way of thinking, the new album is The James Gang teaming up with Tangerine Dream. Or something like that. The Chinese Whispers methodology we worked on the last two albums, now that everyone has gotten comfortable with it, has been replaced by the Dark Room. Put a bunch of musicians in a lightless room and by feeling one small section of an unknown object have them figure what it must be.’

It would be easy to suppose that the album is about being in a Missile Silo… in Montana… for 20 years or so, but this is Pere Ubu and they’re not about to make things easy. Thomas confirms, ‘I wanted to call it ‘Bruce Springsteen is an Asshole,’ then changed that to ‘Robert DeNiro Is An Asshole,’ then decided maybe that wasn’t a good idea either. It’s not my job to explain.’

The album was recorded and mixed at Suma, Painesville Ohio. Engineer Paul Hamann, and his father before him, have been part of almost every Pere Ubu album since 1976. Thomas and Hamann have explored innumerable production methods over the years, establishing the unique Ubu sound that pre-dated punk and still stands proud of the forced genre defined clichés of the music world.

Over the years, Kristof Hahn had become a regular visitor to the Ubu dressing room during his time-off touring with The Swans. He was given access to the songs from the new album as works-in-progress. “I was just listening to ‘The Healer’ again today and it gave me goosebumps,” he wrote to Thomas. “The whole album sounds amazing already, I would be really proud to be part of it, however small my part might be.” He was brought on board immediately.

The touring arm of Pere Ubu will be heading out on tour with the new album later this year; first-off in the USA, with a full European tour and further USA dates in 2018.