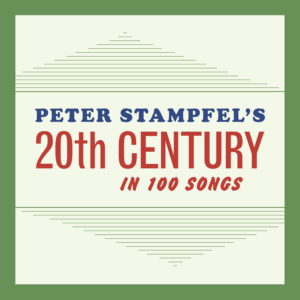 As ambitious as the project obviously is, the basic underlying concept was dead simple: to record Peter’s favorite song from every year of the 20th century. These are not the biggest hits; in fact some selections are virtually unknown outside circles of the most diehard obsessives obscurantists.

In a sense, Stampfel has been preparing for this project throughout his six decade long career. He started in the 1960’s uncovering and revamping repertoire from the 19th and early 20th centuries. He would rewrite/revise and decompose songs from the 19th and 20th centuries, changing the words and music to fit the times with avant-roots mischief makers the Holy Modal Rounders;  playwright Sam Sheppard held down the drum seat for a spell; they lent instrumental support to the debut album of infamous radical poets’ performing collective, The Fugs. The Rounders’ “If You Want To Be A Bird” featured in one of the most pivotal scenes in one of the 60’s most pivotal films, Easy Rider. Stampfel’s never slowed down and never looked back since.

The recording of Peter Stampfel’s 20 Century  initially started in 2001 with a core ensemble featuring Amasa Miller from Charmaine Neville’s, Alex McMurray, Carol Berzas and Jeannie Scofield under the supervision of composer/ guitarist Jonathan Freilich of the New Orleans Klezmer All Stars. Most of the songs from 1901 through 1950 years were done over a few week-long sessions at Bingham’s Piety Street Studios in New Orleans.

The next burst of concerted recording activity came in 2003, with Mark joining Peter in Manhattan for 10 days in the midst of a July heatwave in a downtown loft with no air-conditioning. Drummer James Alsanders was in town and sat in on a few tunes.

Then came the Lull. The last 20 years of the 20th century are not amongst those whose music Peter is most familiar with. In 2016, Peter began soliciting song selections from his many friends who were/are music journalists to cover that era. Mark returned to NYC and recorded Stampfel with pianist Steve Espinola helping out at Redemption Sound in Brooklyn.

On his return to Louisiana, Bingham began recording the Lost Bayou Ramblers at his studio in Henderson, LA. He became the guitarist in the Ramblers side project Michot’s Melody Makers, formed by fiddler/singer Louie, co-founder of LBR. Mark wound up enlisting LBR and MMM bassist Bryan Webre and drummer Kirkland Middleton as accompanists recording the final batch of song with plans to finish the project Spring of 2019.

Then Peter lost his voice; His vocal cords didn’t work. He not only couldn’t sing, he couldn’t talk.  He spent the next few months re-learning how to sing, using a lower register and less volume.

That Fall, while the Lost Bayou Ramblers were on break, Bingham brought Stampfel down to Louisiana, called in Webre, Middleton, and Michot, added Michael Cerveris (star of the Broadway musical adaptation of The Who’s Tommy) and did the last 28 songs!

100 songs, 18 years of record, a century’s worth of music. A gargantuan effort by any measure – and as hugely rewarding a musical experience as you’d expect.