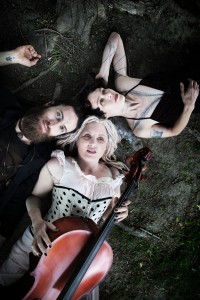 Pioneers in the use of cello as the sole instrument within a rock band, Rasputina are releasing a new album titled Unknown and touring cross country this Summer. They’ll also be touring the MidWest this Fall. I’m hoping you’ll consider advancing their show with a feature or album review.

Unknown is a CD only release- non-digital. Why? At one level, this album is about trauma, Melora’s trauma at being hacked – silently and anonymously observed through the Cloud. Conceptually, this album doesn’t exist on the Internet. It’s a real and physical thing. Anyone who purchases it is known to her.

Rasputina has been inspiring young string players to commit a number of musical sins since 1996. The group’s concept was written as a manifesto, and manifested accordingly by Creager as a wily subterfuge for a plot to open audiences to adventure: the funny, the sad, the heavy, the tender — they can all exist together.

MELORA CREAGER – voice, cello, banjo
Kansas born & raised, she moved to NYC in the 1980’s. Melora received classical music training as a child, but her performance career began with rock bands and East Village drag/ performance artists. She founded the alternative/ historical cello ensemble Rasputina in 1991 as a way to meet like-minded girls- girls that wanted to rock out on the cello and wear fine costumery. Melora toured in Europe with Nirvana as cellist on their final tour in 1994. Over the years, Rasputina has performed/recorded with Marilyn Manson, Porno For Pyros, Cheap Trick, Goo Goo Dolls and many others. Hardened road-dogs, and with more than 7 albums under their belt, Rasputina continues to amaze and amuse.

The sound and visual concepts that began in Creager’s Rasputina manifestos presaged and influenced movements and trends such as Modern Victorians, Steampunk, freak-folk, corsetry, and crafting. In 19 recordings, and countless public performances, Creager has led a 20 year exploration in cello amplification, recording, and performance.

Luis uses the piano to cast, wild narrative spells. His eyes are that of an androgynous monk with rainbow tentacles. Luis loops words, chants, and sounds through a loop pedal AKA beat-boxing, ‘Beat-Boxing Baroque’. Luis brings his musical madness to Rasputina today.

Cello-fingers in flight and with the voice of a bird, Carpella is from another country, but keeps it a secret which one. She played on Rasputina’s debut album, Thanks for the Ether (1996), then succumbed to the very condition from which she takes her name- carpal tunnel syndrome. Having healed over 20 years, Carpella jubilantly returns to Rasputina in the 21st century.