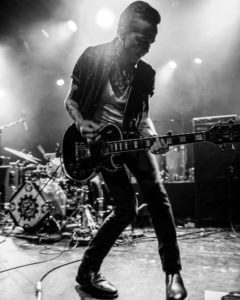 Veteran Pacific Northwest rocker Rich Hope is set to release his fourth album I’m All Yours, his first full-length release since 2009’s Gonna Whip it on Ya. The new album was recorded at Vancouver’s Little Red Sounds studio with producer Felix Fung on weekends, rainy nights, and a lot of stolen time in between. I’m All Yours is being released by Planned Obsolescence Recording & Novelty Inc. October 19.

It’s said around town that seeing Rich Hope is an essential rite of passage. In a city that often obsesses over ephemeral trends, Hope’s explosive rock ’n’ soul man revue proved as enduring as the coastline. For over two decades, he’s filled, and sanctified, an impressive string of beloved venues, many now gone but not forgotten like the Railway Club where bar-receipts records were smashed during one of his sets. And he’s still going strong!

The new album is filled with the gritty, high energy R&B-flavored garage rock that has made Hope an institution in his hometown of Vancouver. I’m All Yours finds Hope and his longtime band bassist Erik Nielsen, keyboardist Matt Kelly, and drummer Adrian Mack at their most versatile and spontaneous. They spin from the psychotically reactive “It Come Alive,” to the woolly-bullying rocker “Running Shoes,” the wired and wiry R&B rave-up “Creepstone,” and a blast of sweet country soul, “Blow Away,” that comes straight out of the Muscle Shoals playbook. There’s the mutant, howling blues of “La Iguana” and an ecstatic rock and roller’s take on the Flamin’ Groovies’ “Golden Clouds.”

I’m All Yours also features pedal steel genius Scott Smith who adds his weight to the innerspace-bound album closer “Heartbreaker.” It’s all the Hope you can handle, all in one place, and none too soon.

Rich was born and raised in Edmonton Alberta Canada where his first band was the Taxicrabs, who were named by the none other than the late, great Country Dick Montana of the Beat Farmers. Relocating to Vancouver, he released his first full-length album Good To Go
in 1998. Soon afterward, he joined the band John Ford, recording two albums and touring extensively with them.

Eventually, he left the group, taking drummer Adrian Mack with him to perform as a two-piece garage act. Over the next six years, he’d be the opening act of choice for a long list of distinguished rabble rousers including The Flamin’ Groovies, Black Crowes, Jon Spencer Blues Explosion, Charles Bradley, The Sadies, Social Distortion, Reverend Horton Heat, and Big Sugar among others.

Throughout his long, notorious career Richard Hope has been exploding on stages big and small, from downtown booze cans in Madrid to Vancouver’s Rogers Arena. Now it’s all on record for your home listening pleasure.