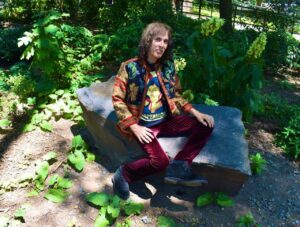 It’s 2022 and Richard X. Heyman is releasing 67,000 Miles An Album. The disc is a collection of brand-new songs mixed with some from a few years back,produced by Heyman, recorded at his home Kit Factory studio with drums recorded at Eastside Sound in NYC. The earlier compositions were written for The Doughboys, in which RXH played the drums and sang. The new album is being released on CD, digital download and via streaming services Turn-Up Records October 21.

He thought he’d try his own versions of these garage-rock-ish stompers (such as Travelin’ Salesman, Crave and Second Street), and he certainly puts his unique stamp on them. Then there are two songs that date back to the beginning of his songwriting – Plans and You Can Tell Me were written when RXH was a wee lad of seventeen! All in all, it all adds up to an adventurous time traveling trip through the pop landscape. The album features Heyman on vocals, a dizzying assortment of exotic, vintage guitars, drums and sundry percussion and keyboards, mainly abetted by Nancy Leigh on bass and backing vocals. Special guests including Probyn Gregory on brass, cellist Julia Kent and Chris Jenkins on viola.

Says RXH: “As I write this in the stillness of a summer day in New York City, I am reminded that we are all speeding through space at 67,000 miles per hour. If that wasn’t enough, we’re also spinning around on our axis at over 1,000 miles per hour. It kind of reminds me of the Tilt-a-Whirl I used to ride at the Fun House in Asbury Park. My new album deals with this frenetic issue along with a variety of other topics. It’s called, no surprise, 67,000 Miles An Album. That’s the approximate distance you will travel as you listen to these songs…have a nice flight!”

Heyman hails from Plainfield, New Jersey, a town which also gave us such luminaries as George Clinton & The Parliaments, jazz great Bill Evans and 60’s top-40 pop group The Critters. It was there that RXH helped form The Doughboys, who released a couple of singles on Bell Records. Subsequently, Heyman landed a record deal with Cypress/A&M and then Sire/Warner Brothers, who released his first two albums, Living Room!! and Hey Man! respectively. Along with his wife, Nancy, RXH has recorded an impressive dozen albums on his own label, Turn-Up Records. With this new CD (his fifteenth!), Heyman once again has written, produced and performed an exuberant display of melody and lyrics that will surely please the most discerning ears.

For those of you unfamiliar with RXH‘s music, it might help to list his influences:  one can hear traces of early rock’n’roll, 60’s British Invasion groups, American folk rock, Motown; even some Broadway and classical baroque find their way into the mix, but it all ends up bearing his singular sound. He’s also lent his drumming chops to Link Wray, Mark Lindsay, Brian Wilson, The Left Banke’s Michael Brown and Steve Martin Caro, and Jonathan Richman, among others. As a guitarist, he performed with Mary Weiss of the Shangri-Las, and played keyboards with Ben E. King.