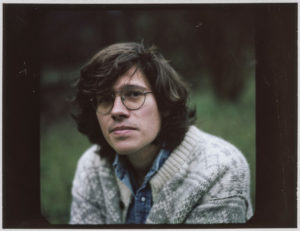 With an arm’s long list of credits stretching from the likes of Kesha, Caitlin Rose and Deer Tick, to Miranda Lambert and Little Big Town, pedal steel savant Spencer Cullum is one of Nashville’s most in-demand session cats. That’s in addition to making up half of acclaimed, primarily instrumental space-country duo “Steelism.” Clearly he’s had little trouble fitting in since moving from his native London to Music City by way of Detroit eight years ago, even if it’s mostly meant blending into the background. “I guess I’ve always hidden behind [the instrument],” he deadpans. “I’m always the guy who looks like he’s studying for a test in the background.”

Now, with a debut solo album, Spencer Cullum’s Coin Collection, paying homage to the ’60s and ‘70s folk-rock heroes of his homeland, this Nashville sideman’s stepping out from the shadows into the spotlight. The album is being released on November 12 by Nashville’s yk Records. Along with a supporting cast of fellow Music City stage and studio aces like guitarist Sean Thompson and multi-instrumentalist Luke Reynolds, as well as singing and writing partners like Rose, Andrew Combs, Erin Rae, Annie Williams and James “Skyway Man” Wallace — he’s bringing a bit of Britain to Tennessee.

While that might sound a little off-brand for a picker who’s made his bones on arena and stadium stages with Miranda Lambert, Cullum notes that his introduction to pedal steel was actually through the instrument’s inclusion on classic English rock albums recorded in 1960s and ’70s. In fact, the man who taught him to play the instrument was the steel player on those recordings. Multi-genre stylist and session man B.J. Cole, recorded with a staggering range of diverse artists including Elton John, Sting and John Cale, to Beck and Björk.

Paradoxically Cullum handling lead vocals duties here left little room for showing off his pedal steel mastery on Coin Collection. “I have a very thick East London accent and really wanted to sing how I talked and not put on a persona,” he says.

Produced by Jeremy Ferguson and recorded at the Grammy-winning Nashville indie-rock producer’s Battle Tapes Recording studio, the album — out 2020 on yk records — boasts a wide-open, bell-clear sound fit for a deftly shimmering set of songs with non-narrative lyrics culled from the mystic corners of the subliminal mind. The lyrics come from “my own experience,” Cullum explains, “but [I] also wanted to not be emotionally specific, almost in a dreamlike, subconscious state. Like spidergram.”