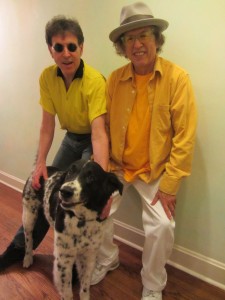 The team of Stephen Kalinich and Jon Tiven has an extensive and extremely impressive combined resume, but resting on laurels is something they refuse to do on their upcoming new album  Each Soul Has a Voice being released by MsMusic July 3. Their respective compositions have been sung the world over by Beach Boys both as a group and as solo artists, B.B. King, Paul McCartney, Wilson Pickett, Alex Chilton, P.F. Sloan, and literally hundreds of others.

Stevie and Jon wrote some 700 songs in preparation for recording  Each Soul Has a Voice before selecting 14 to record. “We write a song a day, generally speaking,” notes Tiven. “Stevie sends me a lyric and I either write something fresh or use a music track that I’ve managed to compose on a day off.  And during this process we achieved a closeness as a team that you cannot get unless you write that many songs as a team. You put two semi-geniuses together and over time they can become one great mind. Like the last one, we did all the recording here in Nashville and Mark Linett mixed it in Glendale, California.  Mark is able to take what we do and make it considerably bigger, which is helpful because our vision of ourselves is far humbler than his. Stevie’s singing considerably more on this record, not just backgrounds but about half of the leads here as well.  I’ve been playing more and more saxophone and that’s been quite personally rewarding. I think my guitar playing on this record is an improvement, but grading myself is a little self-serving. As for the rest of the band, wife Sally Tiven still handles the bass, and Cody Dickinson is again the main drummer with a few other friends helping.

Kalinich got his start in the mid-60’s supplying thought provoking lyrics to the Beach Boys as they sought to mature as a group and began to establish themselves as solo artists.  More recently, he’s collaborated with the legendary but reclusive L.A. songsmith P.F. Sloan. It was P.F. Sloan who initially introduced Kalinich to Tiven.

Jon had started out as a rock journalist, then embarked on a songwriting/producing career that would find him connecting with most of his heroes.  “I grew up on the Rolling Stones,” explains Tiven, “so I took their lead and became good friends and musical partners with Don Covay, Arthur Alexander, and Wilson Pickett.  So their musical spirit informed mine first-hand.”

Tiven made his professional stage debut in 1974 with Big Star at Max’s Kansas City (“Alex wanted another guitarist”) and his recording debut the following year performing on  The Rolling Stones’ Metamorphosis album and Major Lance’s “I’ve Got a Right To Cry.” In the years since, Jon’s had his songs recorded and performed by countless Blues, R&B and rock giants. More recently, he’s performed with the Alabama Shakes, Bettye LaVette, Warpaint, Plan B, and Steve Cropper among many others.

Kalinich and Tiven became fast friends early in the last decade, traveled to India together on a spiritual quest and wound up writing their first song together, “Everything’s Exploding.”  Stevie had made a series of spoken-word albums, one produced by his old friend Brian Wilson who wrote the music for it.  In putting together the California Feeling album — which featured performances by Carnie & Wendy Wilson, The Honeys, David Marks, and many other Beach Boys-related artists singing his lyrics — Kalinich included his collaboration with Jon. When “Everything’s Exploding” attracted a lot of positive notice, Stevie floated the prospect of doing an entire album with Tiven.

This pair wrote and recorded over 200 songs together and having narrowed that down to the cream of the crop turned the recordings over to the brilliant producer/mixer Mark Linett who’s also worked with Brian Wilson and his associates for many years.

When they delivered the first five tracks to MsMusic Productions CEO Carol Schofield, she insisted that they expand the project to a 2 CD set, Symptomology and Shortcuts to Infinity  which was released in 2012 to a good deal critical acclaim both at home and abroad. Then they started writing that next 700 songs!