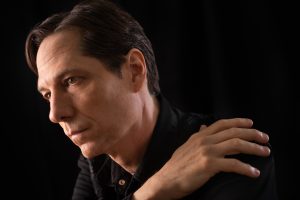 “I wanted to figure out if I still cared enough about music to keep making it,” Dawson said.

He put his creativity on ice for months, then traveled to the Catskills Mountains for legendary guitarist Richard Thompson’s summer songwriting camp, where singer-songwriter Patty Griffin was the special guest. Griffin’s remarkable ability to address stone cold reality in prayer-like songs illuminated a path for Dawson.

“It reminded me of why I started doing it in the first place when I was a teenager,” he said. “I got home from that and started working on this album.”

Over the next three years, Dawson wrote dozens of songs that he recorded in his home studio, Kernel Sound Emporium in Chicago. Although the songs delved into darkness while exorcising ghosts, the process was joyful. He loved playing all the instruments, singing, producing and embracing the freedom to explore. He created three or four different versions of some songs in search of the optimal arrangement. He sang of “the thrill of letting go.”

During this period Dawson also recorded the most acclaimed album of his thirty-year career, Funeral Bonsai Wedding’s LAST FLIGHT OUT (2020), which added a string section to Dawson’s interplay with the band’s trio of jazz players. Drawing comparisons to Van Morrison’s Astral Weeks, the album found Dawson eschewing traditional song structures to embrace elasticity, improvisation, open spaces as well as a more impressionistic approach to lyrics. Released early in the coronavirus pandemic, LAST FLIGHT OUT captured the surreal zeitgeist while offering a healing energy that was cherished by a wide swath of reviewers and listeners.

Also in 2020, the City of Chicago gave Dawson an Esteemed Artist Award, accompanied by a $10,000 grant, to recognize his body of work and to support further efforts. The award not only surprised and heartened Dawson but also helped him complete At the Bottom of a Canyon in the Branches of a Tree.

The new album, his first for the venerable indie label Pravda Records, carries on the thrilling progression of Dawson’s recent work. His songwriting continues to grow in depth and lyricism while his voice has never sounded more rich or resonant. The album’s twelve songs (plus two CD/digital bonus tracks) tie together the American musical influences that span his life: the late 60’s/early 70’s folk-rock of California, where he was born; the country music of Idaho, where he grew up; and the blues, gospel and soul of Chicago, where he has spent the bulk of his adult life. Fans of Dolly Varden, Funeral Bonsai Wedding and Dawson’s previous solo works will recognize the beautiful melodicism, brilliant craftsmanship and emotional depth expressed in the soulful balladry of “Hard Time Friend” and “Forgiveness Is Nothing Like I Thought It Would Be,” the folky reflections of “The Spaces In Between,” the sublime yearning of “Beautiful Mathematics” and the gentle dreamscape of “We Are Walking in a Forest,” a duet with Dolly Varden’s Diane Christiansen.

This is material that couldn’t have been written at any other time in Dawson’s life—and it addresses life in the here and now.  At the Bottom of a Canyon in the Branches of a Tree

revisits depths that many of us have experienced in recent years and takes us to heights to which we all aspire. It’s the inspirational music we need to hear in 2021.