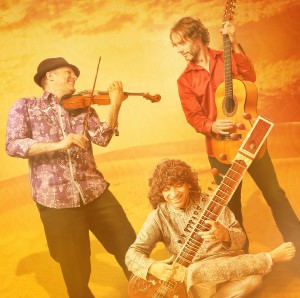 Since forming eight years ago, Sultans of String’s music has hit #1 on national radio charts in their native Canada, and have received multiple awards and accolades, including two JUNO nominations, 1st place in the ISC (out of 15,000 entries), two Canadian Folk Music Awards. McKhool was awarded a Queen’s Diamond Jubilee Medal for his work in creating community through music. Over the years the group has shared stages and recording studios with renowned guests like Paddy Moloney and The Chieftains, David Bromberg, Alex Cuba, Ken Whiteley with other exciting collaborations yet to be announced.

With their new release, Subcontinental Drift, Sultans of String serve up a blend of ragas, reels and rumbas. Fiery violin dances with rumba-flamenco guitar, atop unstoppable grooves laid down by bass and percussion. Acoustic textures meet electronic wizardry creating deep layers of sound. Exotic rhythms from around the world incite listeners to rise to their feet with the irrestistible urge to dance. Throughout the album they are aided by featured guest, sitar master Anwar Khurshid (whose music appeared in the Oscar winning films Life of Pi, Kama Sutra, and Love Guru). The band was very excited about undertaking this East-meets-West collaboration with Khurshid. “There is something magical about joining the world music rhythms we play, with pop sensibilities and blending that with the music of the East”, says bandleader and violinist McKhool.

“Anwar’s become a great musical and personal friend.” says Chris. “Together we started writing songs about the freedom and equality we experience living here in Canada, about finding ourselves, and our hope of creating a better world. And I feel in some way that these songs reflect our own personal journeys towards finding a world peace.” Perhaps one song above all on the album highlights the universality of music. “Anwar and I discovered that we knew a tune in common with different names. There’s an ancient Irish fiddle tune called ‘Rakes of Mallow.’ It also made its way to England and when the English were ruling India, I guess the English and the local Indian musicians were playing and learning from each other musically. I knew it on the fiddle and Anwar knew it slightly differently on the sitar. In India they have been calling it ‘Band Sargham’ and our two interpretations of the tune totally matched and locked in together”.

Chris McKhool (the name would have been “Makhoul” back in his family’s ancestral home of Kfarmishki, Lebanon) grew up in a Lebanese-Egyptian home in Ottawa bursting with music and cultural diversity, mastering the violin at an early age. He first heard guitarist Kevin Laliberté’s rumba rhythms on a one-off jazz gig Chris was leading – he heard him warming up and was immediately hooked! Sultans of String’s signature sound grew out of the intimate and playful relationship between Chris’ violin and Kevin’s guitar. To this rich foundation, the dynamic duo added bass master Drew Birston (a veteran of songstress Chantal Kreviazuk’s band), jaw-dropping Cuban percussionist Rosendo Chendy Leon (who’d played with hitmakers Parachute Club), and guitarist Eddie Paton (who had worked with flamenco star Robert Michaels).

The band’s U.S. manager and acclaimed promoter David Wilkes (Bela Fleck, Emmylou Harris, Joan Baez) states, “Over the decades, I’ve worked with numerous top ten and #1 Billboard artists. In all that time, I have not worked with composers more talented than Chris McKhool and Kevin Laliberté . Not only are they a superb writing team, they are also amazing arrangers & musicians. Fusing the virtuosic talent of Anwar Khurshid adds to their truly global and mesmerizing sound!”

Sultans of String have been criss-crossing North America for the last several years thrilling audiences with their genre-hopping fusion of Celtic reels, flamenco and Gypsy-jazz with Arabic, Cuban, and South Asian rhythms. They celebrate musical diversity and human creativity with passion and virtuosity.

Equally at home in a festival setting, concert series, or at folk or jazz club, they have been performed at such notable events as the renowned Celtic Connections Festival in the UK, San Jose Jazz Festival, JUNOFest, as well as the NYC’s legendary jazz club Birdland. They recently sold out a headlining date at Koerner Hall in Toronto, and performed with Toronto, Vancouver, Edmonton, Stratford, Ontario and Niagara Symphony Orchestras, as well with Kingsfield POPS in Maine. Sultans of String also performed live on BBC TV, Irish National Radio, and the internationally syndicated radio shows World Café and WoodSongs, and on the SiriusXM satellite network.