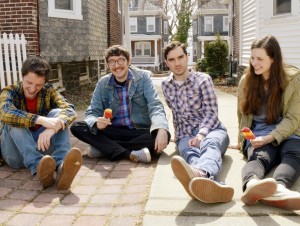 Teen Men is the self-titled debut album from this Delaware-based four piece audio/visual group. The album was recorded at The Garden Center and Paper Lab Recording studios in Delaware and engineered, mixed and produced by band member Nick Krill. It’s being released on CD and Digitally June 9 and on LP vinyl July 14 on the Bar/None label, home to a long line of adventurous but melodically-obsessed artists.

Teen Men comprises two musicians Nick Krill and Joe Hobson (members of The Spinto Band) and two visual artists Albert Birney (creator of the Simply Sylvio series on Vine) and artist Catharine Maloney (who has exhibited internationally and has a Master of Fine Arts from Yale University). The resultant music is an ambitious blending of tunefully trippy melodies delivered via guitars, synthesizers, and vocals, with impertinent samples and haunting, atmospheric ambient electronics.  These performances are audio/visual experiments; innovative, individualistic and concise, reflecting a love of the pop thrill and a dedication to classic songcraft.

In concert Teen Men perform along to a home-made interactive video that is synchronized to the music.  The video provides an interactive platform for the band members and audience.

The members of Teen Men didn’t start working together with the conscious goal of “making a band.”  Longtime friends, Nick, Joe and Albert decided to collaborate on a quick and spontaneous one-off project involving music and video.  The idea was an attempt to reawaken and become inspired after completing especially intense projects in their respective fields (a Spinto Band recording for Nick and Joe and a feature film entitled The Beast Pageant for Albert).  After viewing what they created they decided to make more and invited friends to come participate. Catharine started showing up at sessions and then was assimilated into the project.  After a few months, the four realized they’d created a body of work and that’s when the project was christened “Teen Men”.  The term, taken from an advertisement in a 1960s Playboy,  is a state of mind which anyone can imbibe in. To be a Teen Man involves taking risks, irrational self-confidence, and the search for new experiences.

At the core of the Teen Men’s artistic identity is their unique style of creative interplay, the contrast between how the musicians responded to artistic inspirations and challenges as opposed to the visual artists and the ingenious ways they’d combine them. The results were often beyond what any of them would have imagined left to their own devices. Fundamental was their desire to translate visual elements into music, though the opposite process was constantly occurring as well.  Nick explains:

“When the visual artists would comment on the work, they’d do it with visual vocabulary. When we’d translate that to music, there wound up being distortions of the original thought.  We’d find common ground but the musicians had to work in ways we might not have if communicating only with other musicians.”

Together Teen Men is working to create a sonic and visual experience. Nick says “All the members bring a bit of naivete about the others’ art form, leading to ideas that would not be suggested by more seasoned and knowledgeable artists in each field.”

Catharine sums up how their collaboration functions on a fundamental level:   “All four of us are storytellers, we just approach it in different ways. Combined it makes the experience for an audience member or listener more whole and hits more of their senses.”