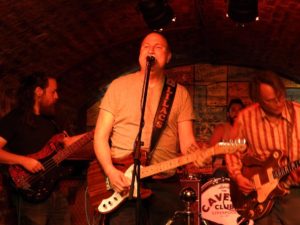 The Lilacs Endure is the first new release by Chicago PowerPop quartet, The Lilacs, in more than 25 years. Produced by indie rock legend Richard Lloyd (Television, Matthew Sweet), and recorded in Nashville at the legendary Studio 19, The Lilacs Endure features four never-before-recorded Lilacs songs and is being released by Chicago’s Pravda label August 16.

The Lilacs Endure features two songs by Kurson, “Monica” and “I Saw Her First,” and two by Levinsky, “Shadow of Doubt” and “Blue Spark.” On drums is John Valley, who played on Green’s legendary first album, and on bass is Steve Poulton, a Nashville session man who the band grew to know over years of playing with master songwriter Paul K. The sound is rounded out by keyboardist Jimmy Matt Rowland, who played organ, piano and synthesizer.

The Lilacs hail from Chicago, where they formed in Summer 1990 by Ken Kurson and David Levinsky, both of whom played guitar and sang lead vocals. Kurson had previously played bass for Chicago pop legends Green, and after leaving the fold, he and fellow Glenbrook North High School graduate David Levinsky joined together to form the Lilacs, recruiting Indianan Tom Whalen on bass and another Glenbrook North alum, John Packel on drums. The name was chosen for the group by Material Issue frontman Jim Ellison, who also produced the group’s first 7″ record — The Lilacs Love You.

John Packel left the fold after that release and was replaced by yet another Glenbrook North alum, Arthur Kim. The next record, The Lilacs Hate You, contained Kurson’s syruppy opus “Baby Tells Me,” as well as a Levinsky-penned rager called “The Knife.”

The group went into Idful Music to record their first full-length CD, The Lilacs Rise Above the Filth. Produced by Brad Wood, who would soon become well known for recording fellow Chicagoan Liz Phair, the CD was met with wide praise and much college radio play. Ira Robbins describe its “Witty, post-adolescent, rock and pop originals” in Trouser Press noting that “the spunky and unpretentious Rise Above the Filth contains attractive examples of Kurson’s sprightly ’70s-styled youth-pop.”

The group’s masterpiece, released in 1992 by Dead Dog Records (a play on the fake record label from the television show Wiseguy) was the Penelope single, which featured “Have I Told You” and Levinsky’s “Pointless.”