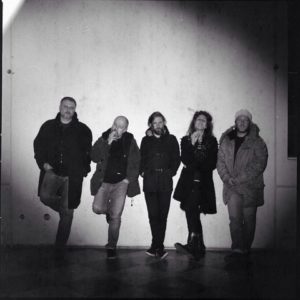 The Red Step is the eponymous debut album from the powerful pairing of The Black Heart Procession’s Tobias Nathaniel with the cream of Belgrade’s Garage-Rock music scene. The Red Step is being released on colored marbled vinyl with a download card, for digital download and via streaming platforms by Chicago’s Pravda Records on February 26.

The Red Step’s first single “Black Summer” is the perfect introduction to the group’s dynamic mix of energetic garage rock, post punk gloom, and world-weary lyrics. Further singles to look out for this autumn are “Reset,” a call against stasis and a primal scream for vitality, “Before the Storm,” a slow burner with a bitter edge, and “For the Dead,” a haunting song of resignation and regret.

Londoner Sarah Jane Seatherton also joins The Red Step on cello, and Tobias handles vocals and guitar. In addition, Boris and Vladimir are current members of the Black Heart Procession lineup, and Vladimir has played drums with Andre Williams.

Beyond his work with The Black Heart Procession, Nathaniel has recorded with indie rock legends Blonde Redhead, and played piano on what became the “Evil Morty” theme on the hit TV show Rick and Morty. He has also played with Bauhaus bassist David J.