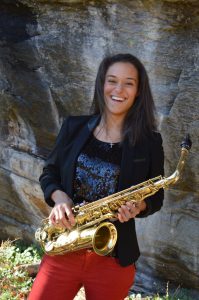 Maryland singer, songwriter and saxophonist Vanessa Collier is releasing her sophomore effort Meeting My Shadow. The new album was recorded at Music + Arts Studio in Memphis co-produced by Collier and Kevin Houston. Meeting My Shadow is being released by Ruf Records March 24 distributed by the In Tune Music Group.

Meeting My Shadow presents eleven songs that explore life’s triumphs and challenges. “This album is really a collection of experiences,” explains Vanessa, “which are as varied as the musical influences I draw from. I like to write about subjects that connect with audiences and that are universal to life, and I like each song to take you on a journey, both in the lyrics and in the music. This album has songs about shared struggles, empowerment, and perseverance that make you feel like you can overcome any obstacle.

“This album is then balanced out with witty, playful songs that make light of life,” she counters. “For instance, Poisoned The Well is about being let down and watching someone poison your surroundings, but there’s a strength in accepting that and always standing true to yourself. When It Don’t Come Easy is about perseverance and finding your strength to keep moving regardless of any obstacles. Then, I have songs like Two Parts Sugar, One Part Lime and Meet Me Where I’m At, that are about finding the fun in life and celebrating each day.”

As bandleader and co-producer, Collier was the driving force behind last October’s sessions in Memphis. Her contributions include a wide range of instruments from flute to organ, alongside her trademark soul-drenched vocals and searing sax. “The saxophone is very much an extension of my voice in each song,” she notes, “and you can really feel my attitude and emotion in the song through the way I play it. With my saxophone, I can wail, I can growl, I can cry. I can drive a song forward with a strong, edgy, unleashed attack. I can be subtle and beautiful. I can be strong and powerful.”

Meanwhile, Vanessa is quick to credit co-producer Kevin Houston and the crack-squad of studio musicians who brought grit and groove to her new material. “I got to laugh with T.K. Jackson (drums), find a sincere friendship with the very talented Laura Chavez (guitar) and feel my jaw drop with the slide guitar work of Josh Roberts. I was also deeply touched by Charles Hodges’ (keys on innumerable classic Hi Records sessions behind legendary artists like Al Green) deep appreciation for my music and for my skills as a songwriter, and by Daniel McKee’s (bass) comparison of my music to that of Prince, in that my music appears simple and approachable by everyone, but has a surprising nuanced challenge that makes it really interesting as a musician. All of the musicians on my album were great to work with, and for me, these sessions were about bringing my music to life to share with people throughout the world. I’m super excited to do that in 2017.”

For uninitiated listeners who have never experienced this fascinating artist, Meeting My Shadow will be a revelation. But to the long-time fans who have followed the Maryland singer, songwriter and saxophonist through the twists of her career, this is the classic album she’s promised from the start. “Meeting My Shadow is a meeting of the past, present and future,” notes Vanessa of this second release. “A tribute to the spirit of blues tradition, a reflection on our present culture and a hopeful wish for growth, understanding and inclusion as we move forward together. It’s also a story of perseverance and empowerment, meant to share strength and provide an uplifting message.”

As anyone at the sharp end of the music business will remind you, there’s no such thing as an overnight success. Vanessa was already brimming with potential during her early studies at Boston’s illustrious Berklee College Of Music. Yet it was her thrilling sets on tour with Grammy-winning blues titan Joe Louis Walker that achieved lift-off. “I love performing,” she says. “The energy of the people makes me come alive and allows me to find a part of myself that I really only share on that stage. I love that moment after a show, when people come up to meet me and I can see the emotion of being touched by one of my songs.”

Things began to move faster. When debut album Heart Soul & Saxophone landed in 2014 – announcing a songwriting palette touched by blues, funk, rock and soul – Vanessa found herself honoured as a Best Of 2014 Blues Breaker on Dan Aykroyd’s iconic House Of Blues radio show. Since then, she’s been a top-three finalist in the John Lennon Songwriting Competition, fought through to the 2016 International Blues Challenge in Memphis and shared bills with Annie Lennox, Willie Nelson and more. “Of course, there have been setbacks too,” she notes. “But what is a songwriter – or a person – with no setbacks? I learn about myself, and about people, and channel many of those setbacks into my songwriting.”

Meeting My Shadow is the sound of a rising talent reaching unstoppable momentum. “I am unrelenting and passionate about what I do,” says Vanessa. “I’m made to perform and, for me, I don’t see any other option. I’m all in. Let’s go!”