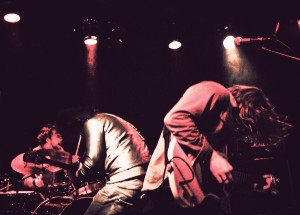 On their upcoming fourth release Gone With The Night, Los Angeles gutter rock trio Wake Up Lucid puts it simply: “Give us something real, something we can feel. Or get fucked.” This statement resounds as both rejection of fakery and pursuit of honest music, which have remained Wake Up Lucid’s only guidelines for writing and performing throughout the half decade’s worth of their existence. The new album was produced by Icarus Line’s Joe Cardamone at his studio, Valley Recording Co. in Burbank and is being released March 31 on WUL Records.

Gone With The Night is a sampling of the fruits of the group’s determined efforts to develop further as song-writers, offering songs that are much more focused and realized, and diversely dynamic — a departure from the band’s usual m.o. of grit and groove hammered-out at high volumes — while still maintaining the inimitable Wake Up Lucid vibe that has crept around L.A. for the past few years.

Their authenticity and immediacy as writers and performers is rooted in their experience of growing up together in the same extended family—a musical one to boot. After pursuing their respective musical aspirations in other outfits, they formed their own some six years ago, distilling their now matured, ripened abilities into the woozy juggernaut that is Wake Up Lucid.

Early on, cousins Ryan, Ian, and Jamie set up home base at Silverlake Lounge on Sunset Boulevard as a challenge to themselves, honing their writing and performance skills in front of one of the most demanding audiences in the world. What resulted was…being offered an album release party, then a residency, followed swiftly by media acclaim from the likes of Rolling Stone, LA Times, Vice/Noisey, Filter, Nylon, MOKB, KEXP… and plenty of others!

After making repeated rounds of the local Los Angeles gig circuit, a few West-Coast tours and a slot on a SXSW Urban Outfitters Series bill, Wake Up Lucid began landing TV placements, with songs being featured on Discovery Channel’s Weed Wars, Carson Daly Show (NBC), Nashville (ABC), and a two-song live performance on AXS.tv. They teamed up with VonZipper Sunglasses providing the soundtracks for several short films and have had their music feaured in Oakley, Patagonia, Hurley, Fox, Quicksilver, Me Undies and Under Armour ads.

Much of their crucial development as a band has been facilitated by Joe Cardamone who has acted as producer and assisted in the fine-tuning of the band’s sound on three releases, operating out of his studio, Valley Recording Co. in Burbank. Joe has this to say about Wake Up Lucid:

“Each production that I have been a part of with Wake Up Lucid is proving to be exponentially more expansive than the previous. I heard a confidence in their sound this time that was really exciting. Providing them with an environment to take chances has paid off and Gone With The Night is a testament to that. This EP is a warning to what will be coming on the new LP. One of the best bands with guitars in their hands.”